Meaning of 'Bhosadike' in Sanskrit Shows 'Sir, Are You Well?' Is The Viral WhatsApp Message True or Hoax?

A lot of people are sharing it making the 'fake' meaning and the cuss word even more popular. 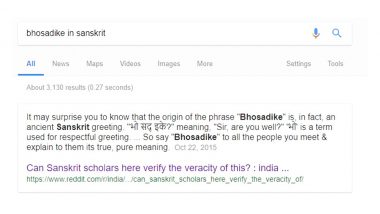 We are living in an age where any forwarded message on WhatsApp is treated as gospel.  Recently, a dirty cuss word is in the news thanks to one such forwarded message!  It says that the Hindi expletive Bhosadike or Bhosadi ke is translated as "Hey sir, how are you?" in the Sanskrit language. What's funny about it is that it is being forwarded on the messaging application and people think it is true. But if you happen to google the meaning of Bhosadike in Sanskrit, it breaks the word in each lettering/pronunciation and relates to the respective Sanskrit meaning.

So there are even arguments about the authenticity of such findings. A lot of people are sharing it making the 'fake' meaning and the cuss word even more popular. Here's how the explanation goes:

Bho is a term used for respect, Brahmins will know it since it is used for salutation normally. Sad is a prefix used for good things, like sadguru, sadiccha etc. And ike translates to a verb of 'to be.' So putting it together it translates to, "Sir, are you well?" as per the explanation. If that wasn't enough, it is also mentioned on some site by a user that the term was a popular form of greeting in ancient India, and it was the Mughals who prohibited the usage.

Well, the internet is sure a funny place but this sure takes the meaning to another ridiculous level. And when people depend on Google for everything, it causes a problem. According to Urban Dictionary, the meaning of Bhosadi Ke is - 'A person who is a perfect ass hole.' Let us tell you, 'Bhosadike' or also called 'Bhosadi ke' or 'Bhosdike' is an extremely degrading term and using it in public can only attract disgust, unless you are singing the popular song, of course, Bhaag DK Bose from Delhi Belly, that could be your cover up!

All in good humour

Disclaimer: There is no truth to this message, so avoid forwarding it!

(The above story first appeared on LatestLY on Jun 29, 2018 12:43 PM IST. For more news and updates on politics, world, sports, entertainment and lifestyle, log on to our website latestly.com).