A video alleging a Monitor Lizard was seen wading in the waters of Bangur Avenue in Kolkatta during Cyclone Yaas is making rounds on social media. 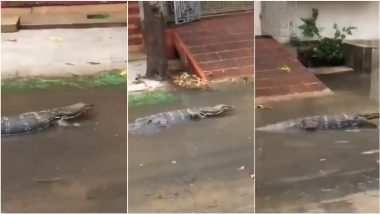 Cyclone Yaas is wreaking havoc in parts of Kolkata, and the rising river water levels due to the landfall has inundated large parts of Bengal’s coastal districts. However, for the citizens of Bangur Avenue,  the rising water levels are not the only issue they have to contend with at the moment. A video alleging a monitor lizard was seen wading the waters in the region is making rounds on social media.

The video was uploaded on Youtube by Satah News. Watch a video from a 7-Eleven store in Thailand of a monitor lizard climbing over items. In 2015, the Monitor Lizard was spotted at the La Martiniere School campus in Kolkatta and created quite a stir among the students. These reptiles are known to consume human carcasses.

Monitor Lizard is known to be a descendant of the Komodo dragon: the Asian water monitor, Varanus Salvator. It’s a large semi-aquatic lizard that is found across south and southeast Asia, including India. The water monitor is one of the largest reptiles in the world. In India, the Bengal monitor lizard reigns supreme in the region, growing to about two metres. However, it’s said that the Bengal monitor can also reach a length of around 1.75 metres. The Bengal monitor is seen in many parts of India – from deserts to wet evergreen patches. However, these reptiles are endangered in India as monitors are hunted for meat, fat and skin. They are also used many of these products are used in traditional medicine.

(The above story first appeared on LatestLY on May 26, 2021 06:07 PM IST. For more news and updates on politics, world, sports, entertainment and lifestyle, log on to our website latestly.com).