World Penguin Day 2018: Know The Answers to the Most Asked Questions About These Aquatic Birds

On this World Penguin Day, let us give you some answers to the frequently asked questions about these birds. 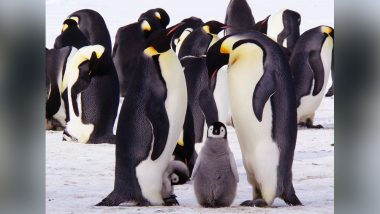 Penguins are cute, comical and just so adorable birds to look at. These aquatic birds are common residents of the Southern Hemisphere, the Antartica, and some exotic environments created specially to suit their habitats around the world. This adorable species of bird is, however, facing the brunt of the climate change. In order to draw attention to them, World Penguin Day is celebrated world over on April 25. The date is chosen because it is roughly the time these creatures annual, northward migration. It is an awareness day to understand the situation of these aquatic birds and the dangers they are facing.

On this World Penguin Day, let us give you some answers to the frequently asked questions about these birds.

Where do penguins live?

Penguins mostly live in the Southern Hemisphere. They are also found on the tropical Galapagos Island, near the Republic of Ecuador. Major populations of penguins are found in Argentina,  Antarctica,  Australia, Chile, Peru, Namibia, New Zealand, and South Africa.

What do penguins eat?

A penguin's primary diet is seafood. They eat a variety of seafood such as fish, squid and crustaceans. The smaller penguins usually feed on krill (a shrimp-like crustacean). Fish and squid are the common diets of these birds. General observation points that the penguins closer to the equator eat more fish and those closer to Antarctica eat more squid and krill.

What is a group of penguins called?

Do penguins have knees?

Looking at a penguin, it may seem that a penguin has no knees but a penguin does have knees, only they are not visible because they are covered by the feathers. A penguin's leg has short femur, knee, tibia and fibula. They appear short-legged because of the feather density, the upper leg bones are thus not visible.

Penguins as birds have wings but they are evolved in such a way, that they can swim than take a flight. Birds that fly have hollow bones, which makes them adapt to flight but penguins have dense bones, which are adaptative for their diving. Penguins use their wings as limbs for swimming deep and a penguin can swim around four to seven miles per hour. Although, they may jump in water which may look like they fly. But essentially penguins are flightless aquatic birds.

Although all the black and white birds in the snow may look same to you, there are about 18 different species of penguins. All of these are particularly found in the Southern Hemisphere. This World Penguin Day, make sure you have your facts cleared about these adorable birds and also contribute to spreading awareness about them.

(The above story first appeared on LatestLY on Apr 25, 2018 06:49 PM IST. For more news and updates on politics, world, sports, entertainment and lifestyle, log on to our website latestly.com).