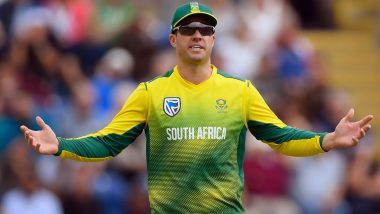 It has been a while since AB de Villiers is in the talks to break his retirement and represent South Africa again. Well, the wait is likely to get over as the former Proteas captain can make his international comeback in the five-match T20I series against West Indies next month. Last month, South Africa head coach Mark Boucher hinted towards De Villiers’ comeback for the T20 World Cup, scheduled in India in the months of October and November.  Even the 37-year-old gave a positive response on being asked about representing his nation again. “It will be fantastic to play for South Africa again, I will be speaking with Boucher late end of IPL – last year, he asked me whether I am interested and I said ‘absolutely’,” De Villiers said during IPL 2021, which got postponed due to COVID-19 pandemic.

Now, none other than Cricket South Africa (CSA) Director Graeme Smith has also hinted towards the comeback of the former skipper along with Imran Tahir and Chris Morris. Smith believes that the comeback of these stars could bolster South Africa’s line-up in the T20 World Cup. While announcing South Africa’s tour to West Indies, the CSA Director said that the board is looking to bat services of De Villiers, Tahir and Morris. The Caribbean Cricket Podcast shared the information regarding the same on Twitter. IPL 2021 Suspended Owing to Increase in Covid-19 Cases Within the Bio-Bubble.

“Cricket South Africa Director Graeme Smith has today confirmed that SA will travel to WI in June for 2 Tests and 5 T20is at venues yet to be finalised. He also said he is hopeful of free agents AB De Villiers, Imran Tahir, and Chris Morris playing,” the tweet read.

Meanwhile, if form is the criteria, De Villiers walks in to the national side without any hassle. In IPL 2021, the Royal Challengers Bangalore (RCB) dasher scored 207 runs in 6 innings at an average of 51.75 as well a highly impressive strike rate of 164.28. Well, these numbers aren’t ordinary by any standards and De Villiers, who shockingly announced his international retirement in May 2018, will be a tremendous addition to South Africa’s line-up.

(The above story first appeared on LatestLY on May 08, 2021 04:56 PM IST. For more news and updates on politics, world, sports, entertainment and lifestyle, log on to our website latestly.com).