AB de Villiers expressed his desire to break retirement for the ICC T20 World Cup later this year. The 37-year-old also added that he had a conversation with South Africa head coach Mark Boucher during last year’s IPL, where the latter asked whether he would be interested in playing for the Proteas again. To this, De Villiers replied – Absolutely. 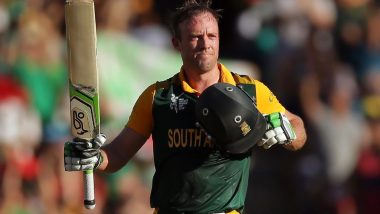 Former South African captain AB de Villiers has confirmed his availability to represent the Proteas side once again. The dashing batsman shockingly announced his retirement from international cricket in 2018 but continued to showcase his prowess in T20 leagues worldwide. However, it seems like fans will again see the Royal Challengers Bangalore (RCB) star donning the South Africa jersey. During RCB’s recent match against Kolkata Knight Riders (KKR) in the Indian Premier League (IPL) 2021, De Villiers scored 76 off mere 34 balls to hand his side a comfortable 38-run triumph.

During the post-match presentation, De Villiers expressed his desire to break retirement for the ICC T20 World Cup later this year. The 37-year-old also added that he had a conversation with South Africa head coach Mark Boucher during last year’s IPL, where the latter asked whether he would be interested in playing for the Proteas again. To this, De Villiers gave a one-word reply which was enough to showcase his intention – Absolutely. Mark Boucher Sheds Light on AB de Villiers’ Return to South Africa Team.

“It will be fantastic to play for South Africa again, I will be speaking with Mark Boucher late end of the IPL- Last year, he asked me whether I am interested and I said ‘Absolutely'” said AB de Villiers.

”Coming into the IPL and looking at the form I am in and the fitness, also the situation, Boucher will looking to get the best 15 together,” he further said. “And if there is no space for me, then so be it but if I am in the squad it will be fantastic to see things fall in place. I am waiting to hear from Boucher towards the end of IPL and then I’ll plan accordingly,” he added. IPL 2021 Points Table Updated.

Recently, Boucher also talked about De Villiers’ comeback, where he said that the RCB star is pretty much open to represent his national side again.

“I did chat to him (AB de Villiers) before he went to the IPL. The conversation is still very much open,” Boucher was quoted as saying by timeslive.co.za.

“AB, being the person he is, wants to perform very well at the IPL to prove to himself and everyone else that he is still a very key figure in world cricket and could dominate at that level,” he added.

“I said to him: ‘Go do your thing, and I’ll give you a shout towards the back-end of the IPL.’ So that is where we are with him,” Boucher further added.

Despite being 37, AB de Villiers still has a lot of cricket to offer and his return would undoubtedly help the South Africa side who has been struggling lately. At the moment, however, his primary goal is to continue his purple patch in IPL 2021 and take RCB to the elusive total.

(The above story first appeared on LatestLY on Apr 19, 2021 08:40 AM IST. For more news and updates on politics, world, sports, entertainment and lifestyle, log on to our website latestly.com).