AUS vs BAN Head-to-Head Record: Ahead of ICC CWC 2019 Clash, Here Are Match Results of Last 5 Australia vs Bangladesh Encounters!

There is a strong possibility of rain in the contest which will be a huge disappointment considering these two teams do not often play against each other. 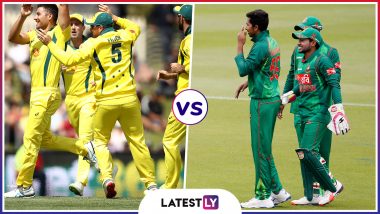 Bangladesh have to defeat Australia if they hope to progress to the semis of the ICC World Cup 2019. The Tigers have done well in the tournament with their only defeats coming to New Zealand and England. The quality of cricket, particularly from Shakib Al Hasan has exceeded expectation. Yet it may all prove to be futile in the end if they cannot break into the top four. Australia’s only loss to Bangladesh came back in 2005, a game known for Mohammad Ashraful’s heroics. In terms of head to head, in 20 matches – Bangladesh have won 1, Australia 18 and 1 game produced no result. Let us look at how their last five games panned out. Australia vs Bangladesh Cricket Score 26th ODI Match.

Pacer Mitchell Starc picked up 4 wickets to dismantle the Bangladesh batting line up who could only manage 182 in 44.3 overs. Unfortunately for Australia, the rain came down heavily in the second innings and the match was abandoned. AUS vs BAN, ICC Cricket World Cup 2019: Mitchell Starc Vs Tamim Iqbal and Other Exciting Mini Battles to Watch Out for at The Trent Bridge Stadium in Nottingham.

Michael Hussey’s power-packed century powered visiting Australia to 361 on a batting paradise in Dhaka. The Bangladesh response was brilliant courtesy a 136 run stand between Imrul Kayes and Shahriar Nafees. But after their wickets fell, Bangladesh fell apart losing the game by 66 runs.

Mitchell Johnson picked up three wickets and was supported well by Steve Smith who chipped in with two to restrict Bangladesh to 229/7. A record-breaking 185 runs by opener Shane Watson helped Australia chase down the target with 9 wickets to spare.

Australia set Bangladesh a target of 271 with Michael Clarke getting a patient 101 off 111 balls. In the second innings, Bangladesh despite losing just five wickets could not get the required runs. The Australians bowled to a plan and did not let he home side break the shackles, winning by 60 runs.

A low scoring contest in Darwin ended with Australia defending a meagre total of 198 courtesy its pace attack that picked up 7 out of 10 wickets that fell. Despite Tamim Iqbal scoring 63 for the visitors, they were bowled out for 125.

There is a strong possibility of rain in the contest which will be a huge disappointment considering these two teams do not often play against each other.

(The above story first appeared on LatestLY on Jun 20, 2019 12:43 PM IST. For more news and updates on politics, world, sports, entertainment and lifestyle, log on to our website latestly.com).