AUS vs PAK, ICC Cricket World Cup 2019: Aaron Finch vs Mohammad Amir and Other Exciting Mini Battles to Watch Out for at Taunton County Ground

The weather forecast at Taunton is not so favourable, but with Pakistan and Australia on the cards, it will be an entertaining night for the fans. 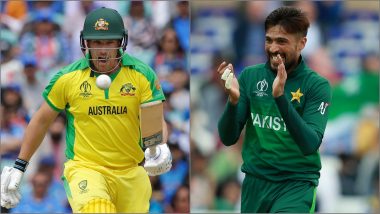 In three matches that both the teams have played in CWC 2019, Australia have won two and lost one; whereas Pakistan has won and lost one each, while their third match ended as a no-result. As both Australia and Pakistan ready themselves for the contest tonight, we bring you a list of mini-battles that will make the match more interesting for the fans. Australia vs Pakistan Dream11 Team Predictions: Best Picks for All-Rounders, Batsmen, Bowlers & Wicket-Keepers for AUS vs PAK in ICC Cricket World Cup 2019 Match 17.

Mitchell Starc might not be in red-hot form, but the bowler is only a match away from striking form. Given the talent that he possesses it will be interesting to see how Pakistan’s Fakhar Zaman negates his raw pace and bounce. However, if Fakhar gets going in the initial overs, especially against Starc, then the crowd is in more excitement. Pakistan vs Australia Head-to-Head Record: Ahead of ICC Cricket World Cup 2019 Clash, Here Are Match Results of Last 5 PAK vs AUS Encounters!

Mohammad Amir hasn’t been in great touch recently, and so is Aaron Finch. Nonetheless, it is worldly-known that how destructive both the players can be on their given days. It’ll be intriguing to see who between the two will dominate either of them. Will Amir get the best of Finch, or will the Australian captain take him all over the park.

One cannot forget the duel between Wahab Riaz and Shane Watson at World Cup 2015. One can only think how exciting will it be if Wahab gets his line and length perfect against David Warner. Then it was Watson, who was in amazing form, and this time it is Warner. The battle between the two will be one of the most delighting if either of the two gets going.

Both Australia and Pakistan would be eyeing to earn two points in the match as every point will count in the business end of the World Cup 2019 tournaments, especially with how the weather is playing spoilsport, and rather is becoming the deciding factor with points being shared. The weather forecast at Taunton is not so favourable, but with Pakistan and Australia on the cards, it will be an entertaining night for the fans. Stay tuned to LatestLY for all the latest updates about ICC Cricket World Cup 2019.

(The above story first appeared on LatestLY on Jun 12, 2019 12:30 PM IST. For more news and updates on politics, world, sports, entertainment and lifestyle, log on to our website latestly.com).