Australia vs New Zealand 1st Test 2019, Key Players: Marnus Labuschagne, Tom Latham, Pat Cummins and Other Cricketers to Watch Out for in the Day-Night Test 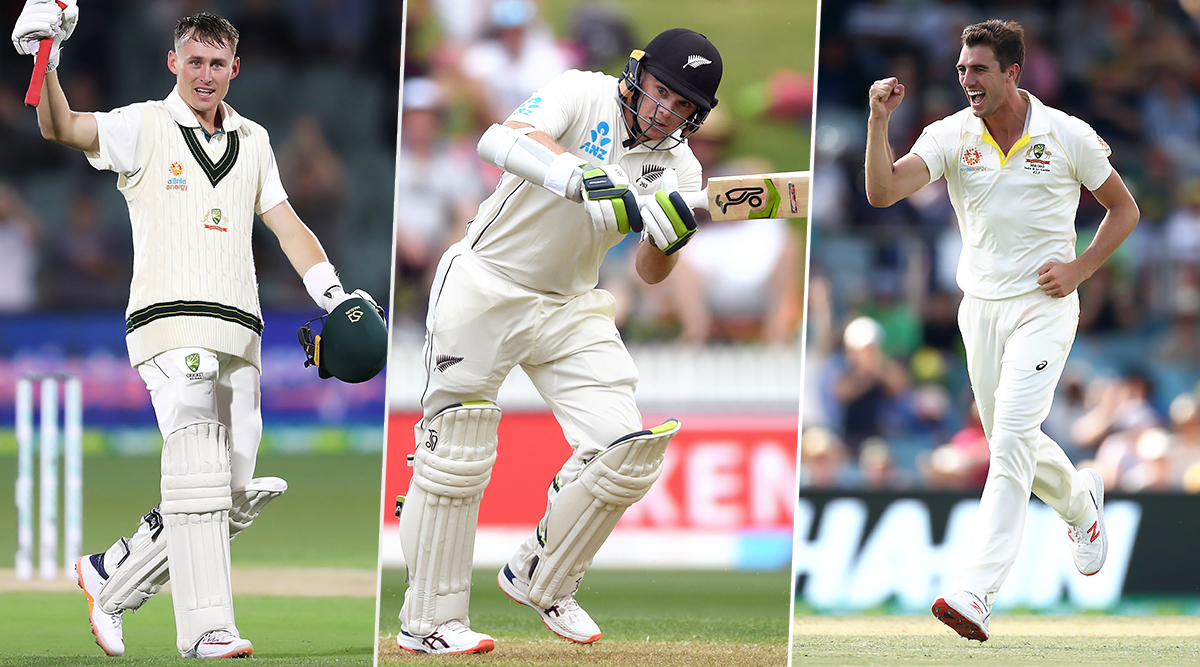 After thrashing Pakistan 2-0 at home, Australia are all set to tussle New Zealand in a three-match Test series. The first clash will be played at the Perth Stadium and will commence from December 12. The match will a Pink-ball encounter and one can expect to witness a terrific display of fast bowling from both sides. Josh Hazlewood, Mithcell Starc and Pat Cummins will possess a great challenge to Kane Williamson and Co and it will be interesting to see who will come on top on these battles. Below, we’ll look at some players who can come good in the opening match. Australia Vs New Zealand, Cricket Score 1st Test Match.

The first-ever day-night Test was played between these two sides in which Australia came on top by three wickets. In fact, after that, the Aussies played five more day-night matches and won all of them. They are also the most successful side in this version of Test cricket. Talking about New Zealand, they also played a day-night Test against England recently in which they triumphed by an innings and 49 runs. So, both the sides are in great form and will leave no stones unturned to clinch the upcoming series. Meanwhile, let’s focus on the players who can make a mark in Perth.

The right-handed batsman is enjoying the form of his life as he scored not one but two scintillating centuries in the recently concluded Test series against Pakistan. However, the likes of Tim Southee and Trent Boult are expected to put up a more difficult challenge and it will be interesting to see, how the youngster will perform.

Latham has a knack of scoring daddy hundreds in the longest format of the game and the Aussies will not want to see his heroics in the opening clash. The left-handed opener has a solid defence and will have the onus to neutralise the star-studded Australian bowling line-up. However, the pink-ball is known to assist the pacers and the star batsman will need to be at his best.

Cummins is currently at the pinnacle of ICC Test bowling rankings and the visitors must vary off him. The right-arm can set the speed gun on fire and his ability to extract bounce from the pitch makes him a force to reckon with. Also, the bowler has the experience of handling the pink-cherry which can come handy in Perth.

Pace and Perth go hand in hand which means Ferguson has a great chance to go through the defences of Steve Smith and David Warner in order to put his side on the driver’s seat. Ferguson is also very well capable of extracting bounce off any surface and thus will look to use the bouncers to good effect.

The Kiwi skipper is a veteran of the game and will handle the mantle of run-scoring for his side. Williamson has a very good record down under and will aim to better his record further in the upcoming series. However, the right-handed batsman didn’t enjoy a rich vein of form in recent times and will seek to break the shackles against the Aussies.

Along with the series victory, 120 points in the ICC World Test Championship are also in stakes and both the sides will give their best in the upcoming series. Going by the recent form, Australia will step into the series as favourites. However, Kane Williamson and Co should not be taken lightly as they are very well able to turn the tables around.