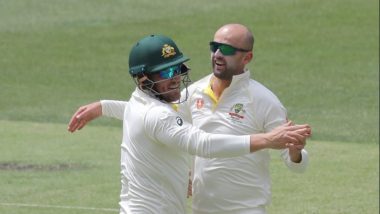 The Sydney Cricket Ground has been witnessing the dominance of the hosts in all the departments of the game. The Australian team today dominated the New Zealand Nathan Lyon got five wickets which gave an extra edge to the home team. Now in this article we bring you ball-by-ball commentary details and the live scorecard. But let’s have a look at how the day three worked out for both teams. As mentioned earlier Lyon snapped five wickets and put the hosts in total control and  bowled a stunning economy of 2.22 . Bowling 30.4 overs, he conceded 68 runs, bowling 10 maidens. Australia Vs New Zealand, Cricket Score 3rd Test Match.

Pacer Pat Cummins also sprang into action as me scalped there wickets. It wouldn’t be wrong to say that the batsmen could not sustain for a long time to face the killer spells bowled by the bowlers. Only Glenn Phillips stayed on the field facing 115 balls  and made 52  runs. Collin de Grandhomme and Todd Astle tried their level best to save the Kiwis from the blushes as they made 20 and 25 runs respectively. In the end  the Kiwis got bundled  out on 251 runs.

Ass of  now we have David  Warner and Joe Burns batting for Australia on the score of 25 and 16 runs respectively.  The Aussies lead the game  by 243 runs and  in the second innings, the team stands on the score of 40 runs for no loss of a wicket. The Kiwi bowlers would want to scalp as many wickets possible and would thus want to win the game. You can check the live score and ball-by-ball commentary by clicking on the link here.

(The above story first appeared on LatestLY on Jan 06, 2020 01:01 AM IST. For more news and updates on politics, world, sports, entertainment and lifestyle, log on to our website latestly.com).