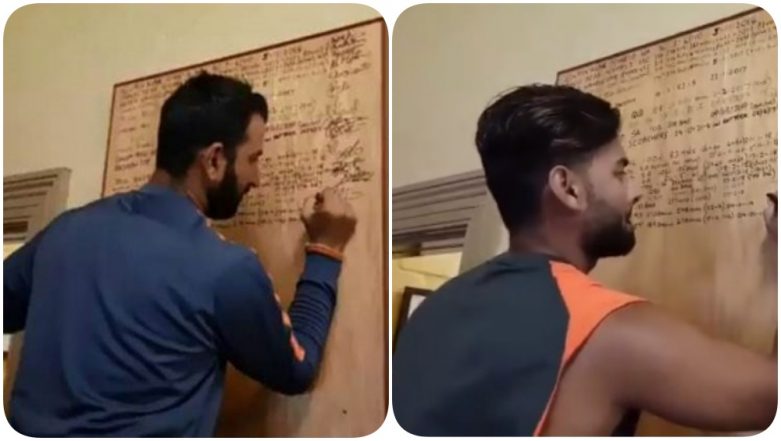 Cheteshwar Pujara and Rishabh Pant were the players who stole away the limelight on the Day 2 of the Sydney Test between India and Australia. Cheteshwar Pujara scored 193 runs and shattered several records. Rishabh Pant too made 159 runs and registered his name in the golden books. Now after the conclusion of day 3 of the game between India and Australia, both batsmen were seen signing the honours on the board at the Sydney Cricket Ground. Shane Warne Offers Tips to Kuldeep Yadav Ahead of Day 3 of Sydney Test; Chinaman Bowler Snaps Three Wickets!.

Both Pant and Pujara signed by their names on the board. With his blistering knock of 193 runs, Pujara grabbed the sixth spot in the list of highest scores by an Asian batsman in Australia. Whereas, the 21-year-old became the first India wicket-keeper to score a hundred in Australia with his unbeaten knock of 159 runs.  India vs Australia 4th Test Day 3 Video Highlights: Kuldeep Yadav, Ravindra Jadeja Hand IND Advantage.

The official account of the BCCI shred the video of the two signing on the board. “On the Board and with signatures - @cheteshwar1 & @RishabPant777 do the "Honours" at the SCG #TeamIndia #AUSvIND,”read the caption of the video.

On the Board and with signatures - @cheteshwar1 & @RishabPant777 do the "Honours" at the SCG #TeamIndia #AUSvIND pic.twitter.com/QPBbuCCNxs

After the end of the day’s play, Pujara said, that his coach cum father congratulated him for the innings. “He [Pujara's father] congratulated me. People said I missed out on a double hundred but he said you still scored 193 and a double hundred is just a number.” He also went on to say that he refrains from getting chained into a web of thoughts while he is batting. “I think I try and keep my mind blank. For me, batting is like meditation, if you are thinking of something you can't bat. I don't have any thoughts when I am batting,” he explained.