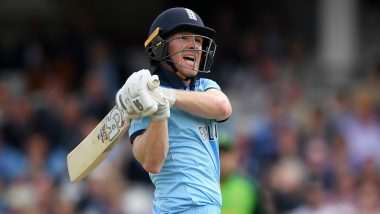 Morgan is now the leading run scorer for England in the One-Day Internationals. The left-handed batsman made his ODI debut playing for Ireland vs Scotland in the year 2006. The prolific batsman has scored 12 hundreds and 45 fifties in his career.

England is playing South Africa in the opening game of ICC Cricket World Cup 2019. The English and Proteas side have faced each other on six occasions at CWC tournament, where both teams have registered a victory in three matches. England walks into this game as the No 1 ODI side as per ICC ranking and is considered the favourite to win the CWC 2019 trophy apart from India.

(The above story first appeared on LatestLY on May 30, 2019 04:58 PM IST. For more news and updates on politics, world, sports, entertainment and lifestyle, log on to our website latestly.com).