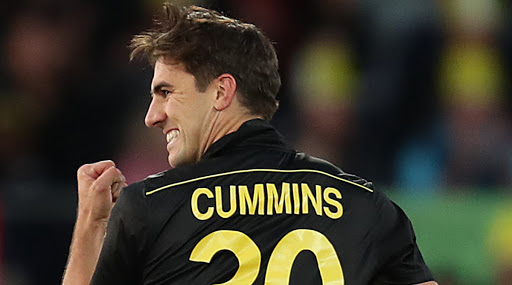 Mumbai, January 14: Australia pacer Pat Cummins, who became the most expensive overseas player in the history of the Indian Premier League (IPL) when Kolkata Knight Riders (KKR) snapped him up for Rs 15.5 crore in the auction, said he is eager to help the team win their third title after a fan welcomed him to India with his 2015 jersey.

Cummins is here for Australia's ongoing three-match ODI series against India and took two wickets in the first match at the Wankhede on Tuesday. The No.1 ranked Test bowler met a fan after reaching here, who gave him a special gift - a KKR jersey with Cummins' name from 2015. India Vs Australia, Live Cricket Score 1st ODI Match.

Cummins has played for KKR before in 2014 and 2015 and in a video shared by KKR on their social media platforms, the Australian pacer spoke about the gift and how it brought back memories of his time with the team before.

"I'm here back in India and I've run into a fan and he's gifted me this old KKR shirt from 2015," Cummins said.

"It brings back a lot of memories. I'm really excited for the season," he added.

"Got some great memories at Eden Gardens. As a kid, I remember watching lots of cricket played there and just seeing 100,000 Indian fans going crazy.

"I absolutely love it there. Can't wait to make a lot more memories this season," he said.

Pointing to the logo on the jersey, Cummins said: "So, I'm just looking closer at the logo. You can see two stars there, because we've won two titles.

"I think this is the season we add an extra star to that," he said.