MS Dhoni to Announce Retirement Ahead of India vs West Indies 2019 Series? MSD's Parents Want Him to Retire and Take Care of Family! 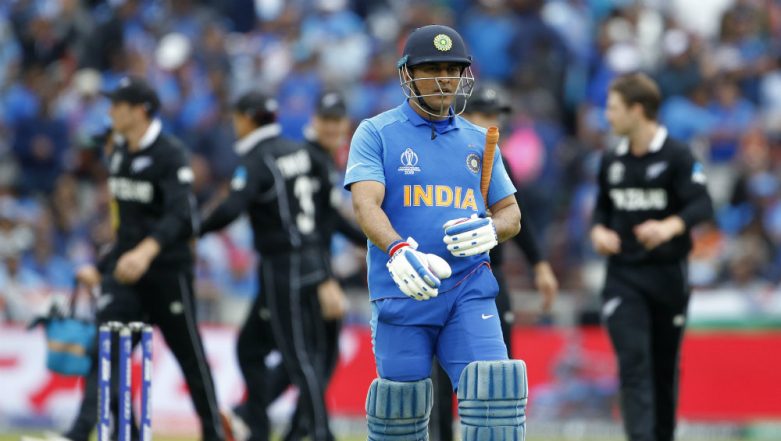 Former Indian Cricket team captain MS Dhoni is on that point of his career where he has to make a decision of retirement and plan his future. Dhoni who is questioned these days for his slow strike rate and sluggish knocks. Amidst these questions, MSD's parents want him to retire from international cricket and take care of his family. Now the big question remains will Dhoni feature in the upcoming series of India vs West Indies, 2019. MS Dhoni Cries After Being Dismissed During India’s CWC 2019 Semi-Final Loss to New Zealand, Watch Video.

MS Dhoni has a massive record to his name and has represented India for 15 years. His captaincy helped India lift the trophy in T20 World Cup, 2007, World Cup 2011 and ICC Champions Trophy 2013. His behind the wicket lightening fast stumping skill is still unmatched. Now the selectors will sit on Friday, July 19, 2019, and take a major decision on Dhoni's selection. Mostly he will be rested for the T20 series as youngsters will be preferred to take place in the squad keeping in mind T20 World Cup, 2020. Yograj Singh Attacks MS Dhoni After Ambati Rayudu’s Retirement, Says 'Filth' Like MSD Will Not Remain Forever.

There is also speculation that even if Dhoni does not make a decision on his retirement ahead of India's tour of West Indies, he might be rested for the upcoming series. Dhoni was seen struggling against spinners. Dhoni is still appreciated by great cricketers, New Zealand skipper Kane Williamson said in a press conference after beating India in the semi-final that if Mahi plans to change his nationality, he will be invited to become part of New Zealand playing eleven.

MS Dhoni's childhood coach Keshav Banerjee told Sports Tak in an interview that MS Dhoni parents no longer want him to play cricket. However, Banerjee backed Dhoni and said that he should be the part of Indian Cricket team in upcoming T20 World Cup scheduled to take place in Australia. Meanwhile, Dhoni is still in England and has not given any comment regarding his retirement to team management.