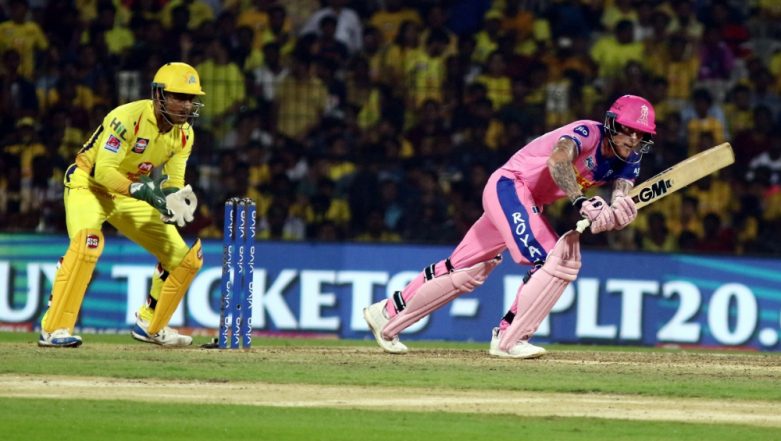 It going downhill fast for the Rajasthan Royals as they have won just a solitary game this season. Their performances at the start of the season did merit a few wins but in the last two games, it has been a one way traffic. With Chennai Super Kings their next opponent, it is very well a do or die game for them as they need to move north in the points table. Mahendra Singh Dhoni’s only blemish came in the away defeat at Wankhede but has been an otherwise flawless season once again in the IPl. In terms of head to head, Chennai and Rajasthan have met each other on 21 occasions with CSK winning 13 and the Royals claiming 8 victories. A look back at how things unfolded in their last five games. Rajasthan Royals vs Chennai Super Kings Live Cricket Score.

Ben Stokes and Jofra Archer tried a late resurgence for Rajasthan Royals who were chasing 176 for victory but could not succeed thanks to the brilliance of Dwayne Bravo. The veteran all-rounder picked up two important wickets including that of Stokes to halt the away side’s momentum. Earlier in the day MS Dhoni’s 46-ball 75 in difficult condition propelled CSK to 175/5.

Suresh Raina hit a half-century and was helped by thirties from MS Dhoni and Shane Watson to help Chennai reach a total of 176/4. In reply, Josh Butler power hitting ensured Rajasthan won the match on the second last ball of the game by four wickets. The Englishman remained not out on 95 which came off just 60 deliveries. Crowd Chants Dhoni, Dhoni As Chennai Super Kings Team Arrives in Jaipur Ahead of RR vs CSK IPL 2019 Match, Watch Video.

Deepak Chahar, Dwayne Bravo, Shardul Thakur, and Karn Sharma bagged braces each to ensure Rajasthan Royals could not get to the total of 205. Chennai batting first crossed the double century mark thanks to a brisk 106 by opener Shane Watson and Suresh Raina’s 46. Stuart Binny was hit for 33 runs in two overs to almost mark an end to his IPL career.

Once again it was the Chennai bowling that left Rajasthan clueless as they fell short of 12 runs in pursuit of 158 on a slow Chennai track. Brendon McCullum risk-free 81 made certain Chennai crossed 150 which looked difficult at one stage. Ravindra Jadeja snapped 4 and Mohit Sharma contributed with 3 wickets to help their team win by 12 runs. Empty Seats at MA Chidambaram Stadium Could Force IPL 2019 Final Out of Chennai.

Openers Shane Watson and Ajinkya Rahane came up with a 144 run stand to help Rajasthan chase down 157. The duo had little trouble facing the quality bowling unit of Chennai as they scored freely all around the park. In the first innings, some late hitting by Dwayne Bravo and MS Dhoni ensured Chennai reached 156/4. MS Dhoni, Sakshi Take Nap on Chennai Airport Floor Before Boarding Flight to Jaipur for RR vs CSK IPL 2019 Match.

Chennai are in looking good ahead of the game and we have a real David vs Goliath situation on our hand. The Rajasthan Royals will have to improve vastly to match CSK’s level.