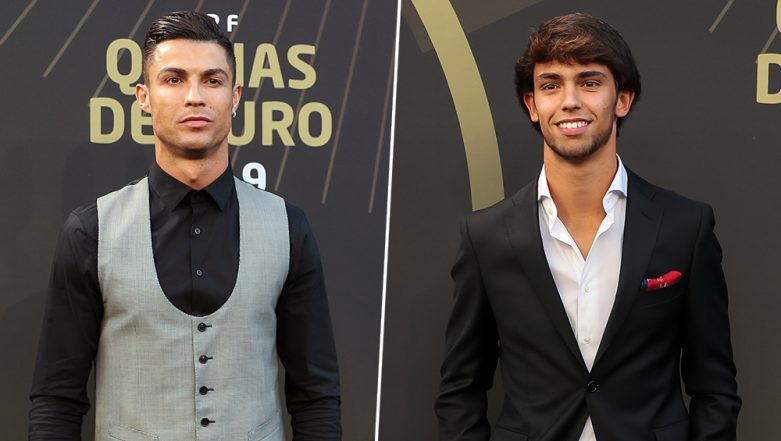 Oeiras (Portugal), September 3: The sporting and personal relationship between Portugal ace Cristiano Ronaldo and their emerging star Joao Felix has been the focus of conversation as the national team trains ahead of its Euro qualifier against Serbia this weekend. The powerful duo are looking to help their team qualify for the Euro 2020 and it will be the first time they will play together since Felix completed his record 126 million euro transfer to Atletico Madrid, Efe news reported. Cristiano Ronaldo & Neymar Indulge in Sword Fighting While Wearing Period Dress (Watch Video).

Much has been said in Portugal of their relationship, which some have likened to a Shakespearean drama with its tints of rivalry -- the old guard threatened by the new. But at the sports city of Oeiras, just outside Lisbon, both preferred to deny it. Ronaldo was more comfortable and more playful with his teammates than the newly-signed 19-year-old, yet both were joking around as they stretched off.  Eric Cantona Speech and Cristiano Ronaldo-Lionel Messi’s Puzzled Looks Make For Amazing Funny Memes; These Moments From UEFA Champions League Draw Stage Cannot be Missed!

Reporters followed the practice session diligently, hoping, perhaps, for any sign of a dig. There was only one, to the disappointment of the press. "He is proving himself even with his age," Ruben Neves, Portugal midfielder, said of Felix during a press conference ahead of the training session. He said the young player had already achieved "very good things" in Portuguese soccer and was now making his name known further afield.

Whatever be the relationship between Ronaldo and Felix, what is certain is that they are a strong choice for the national team coach Fernando Santos. Portugal will play Serbia and Lithuania on September 7 and September 10, respectively. The side will look to win both the matches after having drawn with Ukraine and Serbia in March.