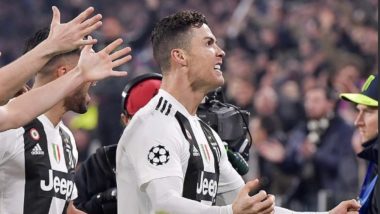 Juventus forward Cristiano Ronaldo is the rumoured to have bought the world most expensive vehicle Bugatti La Voiture Noire. Priced at €11million (£9.49million), the car was first showcased at the Geneva Motor Show 2019. CR7 who has a fleet of luxury vehicles like Mercedes C Class Sport Coupe, a Rolls-Royce Phantom, a Ujn Ferrari 599 GTO, a Lamborghini Aventador LP700-4, an Aston Martin DB9, a McLaren MP4 12C and a Bentley Continental GTC Speed, had made an addition to the collection. However, as per reports, CR7 will not be able to drive this car until 2021 as the company is yet to finalise small details on the luxury machine.

Bugatti has confirmed that they have found the owner for the vehicle but refused to give out more details on the same. This happens to be CR7’s most extravagant buy until now. As per the report, only one was built by Bugatti to mark the 110th anniversary of the founding of the company. Cristiano Ronaldo SURPASSES Lionel Messi; Scores 600 Career Goals During Inter Milan vs Juventus, Serie A 2019 (Watch Video).

Recently CR7 was in the news for surpassing Lionel Messi as he completed 600 career goals during the Inter Milan vs Juventus, Serie A tie. The Barcelona star Lionel Messi has 597 goals to his credits. The strike only makes him the fourth player to score in both games played for the Turin club at the Giuseppe Meazza Stadium in a single Serie A season. As of now, Ronaldo has reached the 20 goal mark for the season.

(The above story first appeared on LatestLY on May 01, 2019 06:24 PM IST. For more news and updates on politics, world, sports, entertainment and lifestyle, log on to our website latestly.com).