Euro 2020 Round of 16 will see two of the competition favourites in Belgium and Portugal face each other in a heavyweight clash in Seville on Sunday (Jun 27, 2021). Both sides are coming into the game on the back of some great performances, led by their star attackers, Cristiano Ronaldo and Romelu Lukaku. 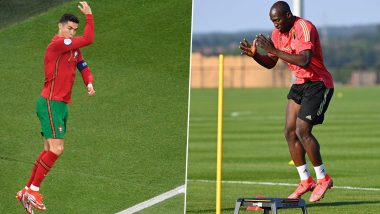 Euro 2020 Round of 16 will see two of the competition favourites in Belgium and Portugal face each other in a heavyweight clash in Seville on Sunday (Jun 27, 2021). Both sides are coming into the game on the back of some great performances, led by their star attackers, Cristiano Ronaldo and Romelu Lukaku, who have been scoring goals aplenty at this year’s European Championships. Cristiano Ronaldo Equals Ali Daei's Record As Defending Champions Secure Round of 16 Berth.

Cristiano Ronaldo is coming in clutch for his national team, giving them the confidence of triumphing once again at the European Championships. Portugal managed to book a place in the Round of 16 following a turbulent group stage but the draw against France will have boosted the morale of Fernando Santos’ men. Romelu Lukaku Scores As Red Devils End Group Stage With Perfect Record.

Despite Juventus’ struggle in domestic and European competitions, the five-time Ballon d'Or winner had a stellar individual campaign and has carried his form to the European championships. The 36-year-old has scored in all three group games so far, becoming the joint-top scorer in men’s international football in the process and is also the leading scorer at the Euros with five goals.

The Bianconeri star is looking at his absolute best in front of the goal which will give the defending champions the confidence of making it into the last eight. However, the Portuguese captain isn’t the only world-class forward on display as Belgium have their own goal-machine in Romelu Lukaku, who is just two strikes behind the Portuguese in the scoring charts at the Euros.

The Inter Milan star led the Nerazzurri to a first Serie A title in a decade ending the dominance of Cristiano Ronaldo’s Juventus and will be aiming to do the same on the international stage as well. The 28-year-old is in sensational form having scored three goals in the tournament so far, helping Belgium to a 100 percent record in the competition.

‘Oh, I need competition. When someone says he's [Ronaldo] better than me, I want to transcend him,’ said Lukaku in a pre-match conference, giving an indication that he is ready to take on one of the best players in the world.

With Portugal and Belgium facing each other, one of the favourites is set to be eliminated earlier than expected but the form of both Cristiano Ronaldo and Romelu Lukaku promises goals in a heavyweight encounter.

(The above story first appeared on LatestLY on Jun 27, 2021 02:56 PM IST. For more news and updates on politics, world, sports, entertainment and lifestyle, log on to our website latestly.com).