Harry Kane has reportedly expressed unhappiness at Tottenham's lack of ambition and inability to challenge for major titles and has asked for a move away in the ongoing summer transfer window. 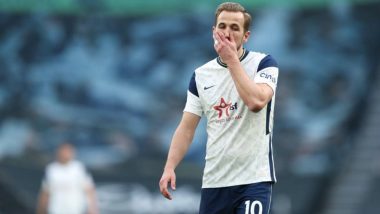 Amidst growing transfer rumours, English striker Harry Kane hasn't turned up for Tottenham Hotspurs' training session for two days. Following his absence, there have been widespread reports about him being involved in a tense situation with the club's hierarchy, given the fact that he had wanted to leave the North London side to pursue a new challenge and compete for trophies. Harry Kane has been one of Tottenham's best players in the Premier League ever since making his first appearance for them ten years ago. But the club's lack of ambition and inability to challenge for major titles has left the talismanic striker unhappy and uncertain about his future at the club. Now he has reportedly asked for a transfer despite new Tottenham coach Nuno Espirito Santo stating that Harry Kane is 'our player'. Raphael Varane Transfer News: Manchester United and Real Madrid Agree Terms for French Defender’s Move to Premier League

Kane has been heavily linked with a move to Premier League champions Manchester City with reports doing the rounds that Pep Guardiola and co is ready to pay a hefty amount as a transfer fee to land the England striker in Manchester after club legend Sergio Aguero departed for Barcelona earlier this summer Despite Kane urging the club to let him go, Tottenham have been absolutely rigid in their approach of not parting ways with their star man. This can, reportedly be the reason why Kane is skipping the training session as a sign of protest.

Following Kane's absence from Tottenham's pre-season training, several reports have also claimed that the England captain would join his club later after completing a 10-day quarantine period following his return from the Caribbean, where he was on a vacation. As of now, there's still remains a lot of uncertainty on Harry Kane's future at Tottenham Hotspur.

(The above story first appeared on LatestLY on Aug 04, 2021 02:15 PM IST. For more news and updates on politics, world, sports, entertainment and lifestyle, log on to our website latestly.com).