Defending champion, Poland's Iga Swiatek, will be keen to maintain her undefeated record at the Italian Open when the event commences here on May 9, with 19 of the top-20 players set to compete in the WTA 1000 tournament. 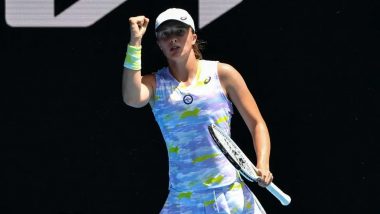 Rome, May 7: Defending champion, Poland's Iga Swiatek, will be keen to maintain her undefeated record at the Italian Open when the event commences here on May 9, with 19 of the top-20 players set to compete in the WTA 1000 tournament. The draw, which was released late on Friday, had world No.1 Swiatek headlining the field. Among the potential Round-of-16 clashes in the tournament, Swiatek could meet 16th seed Victoria Azarenka of Belarus, while 10th seed Emma Raducanu of Great Britain could clash with fifth seed Anett Kontaveit of Estonia. Madrid Open 2022: Carlos Alcaraz Beats Rafael Nadal To Set Up Semifinal With Novak Djokovic.

Another Belarusian, No. 3 Aryna Sabalenka could face 13th seed Jessica Pegula of the US, while 12th seed Belinda Bencic of Switzerland could take on No. 7 Danielle Collins of the US if things go according to script. The other key potential Round-of-16 clashes include, eighth seed Garbine Muguruza against Ons Jabeur of Tunisia, while American Coco Gauff could come up against fourth seed Maria Sakkari of Greece. No.2 seed Paula Badosa of Spain could face Anastasia Pavlyuchenkova of Russia.

Defending champion Swiatek, like all top-8 seeds, has an opening-round bye. In the second round, she will face the winner of an all-American match between Shelby Rogers and Alison Riske. Swiatek could face 2013 Rome runner-up Victoria Azarenka in the Round of 16. Swiatek did not play the first WTA 1000 clay-court event of the season, withdrawing from this week's Madrid Open with a shoulder injury. But the Polish star is still undefeated at WTA 1000 events in 2022, winning titles in Doha, Indian Wells and Miami during her ascent to No.1, according to wtatennis.com. Madrid Open 2022: Novak Djokovic Beats Hubert Hurkacz in Straight Sets To Adavance Into Semifinals.

The bottom portion of the first quarter has two US Open champions squaring off in the first round, as reigning US Open titlist Emma Raducanu will face 2019 US Open champion Bianca Andreescu in their first meeting. Whoever prevails will take on the winner of the match between Sara Sorribes Tormo of Spain and another former US Open champion, Naomi Osaka. That opener is a rematch from Madrid, where Sorribes Tormo defeated Osaka en route to the quarterfinals.

The player who comes out of this section could meet No.5 seed Anett Kontaveit in the Round of 16. No.3 seed Aryna Sabalenka is scheduled to face Madrid finalist Jessica Pegula of the US in the Round of 16, if seedings hold. Pegula will face big-hitting Liudmila Samsonova in the first round. 2020 Rome champion Simona Halep, who has won nine singles titles on clay, will face Alize Cornet of France in the first round in a 2022 Australian Open rematch. Cornet knocked out Halep in Melbourne this year to make her first Grand Slam quarterfinal.

(The above story first appeared on LatestLY on May 07, 2022 04:09 PM IST. For more news and updates on politics, world, sports, entertainment and lifestyle, log on to our website latestly.com).