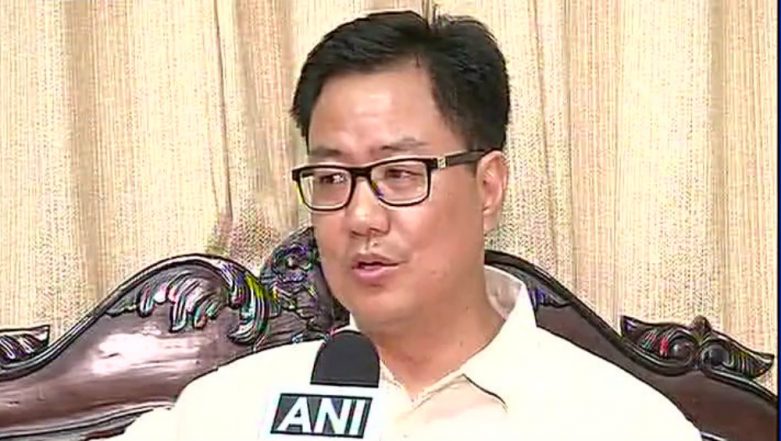 New Delhi, June 3: Kiren Rijiju's appointment as Sports Minister in the newly re-elected NDA government led by Prime Minister Narendra Modi came as a surprise to many. With the Tokyo Olympics round the corner, one would have thought that even if Rajyavardhan Singh Rathore didn't continue in the role, the position would go to someone who has a sports background. Former India cricketer Gautam Gambhir and former BCCI chief Anurag Thakur were the two names discussed as both have a sports connect. Tokyo Olympics 2020 Unveils 50 Official Pictograms.

While Gambhir has been part of two World Cup winning campaigns -- 2007 World T20 and the 2011 50-over World Cup -- Thakur has been in charge of the Himachal Pradesh Cricket Association apart from working in different BCCI posts over the years. But the man who got the portfolio was Rijiju, Minister of State for Home Affairs between 2014 and 2019.

Speaking to IANS, athletes in the country are hoping that Rijiju continues the good work done by his predecessor. Many have written to the newly-appointed minister requesting for a meeting so as to put forward their grievances and demands. Tokyo 2020 Olympics: North, South Korea Propose Unified Teams for Qualifications Event.

One of them is 2018 Commonwealth Games bronze medal winning boxer Manoj Kumar. Manoj wants a "Sports Bhavan" to be built in the national capital for athletes to stay in when they are in the city.

"I have asked my elder brother to request a meeting with the minister through mail," Manoj said. "Just as how there is a Bhavan for every state in New Delhi, I'd like to see one built for sportspersons. Whenever we have to travel outside the country for a big event, we have to first come to Delhi and stay in hotels. I'd like a Sports Bhavan where facilities like good food, swimming pool, weight training equipments and all will be available. I had put this idea forward to former Sports Minister Sarbananda Sonowal but nothing happened after that."

Babita Phogat, the two-time CWG gold medallist, hopes that more is done for ensuring athletes get insurance that will help them when they are injured. "More focus needs to be given to the health of athletes," said Babita. "We are prone to injuries and should be getting insurance that will help us with expenses that may be incurred for treatment and recovery."

Additionally, Babita would also like a separate academy to be made for female athletes and more attention to be given on developments at the grassroots level. "That is where athletes come from. If Rijiju focusses on the grassroots and gives better facilities, good athletes will come out," she said.

Two-time Asian Games medallist Ravi Kumar, on the other hand, would have liked Rathore to continue as Sports Minister. "It would have been beneficial for all of us as he was well aware of what and how things were working beside knowing about the players personally," he said.

Ravi Kumar hopes that Rijiju maintains the TOPS scheme and Khelo India, both of which started in Rathore's tenure. "I feel he (Rijiju) will also come with some new plans for further enhancing the sporting atmosphere in the country," he said.