The Samsung Galaxy M32 phone was spotted on Geekbench that gave out key specs ahead of its official debut. It will be introduced in the country as a successor to the Galaxy M31. 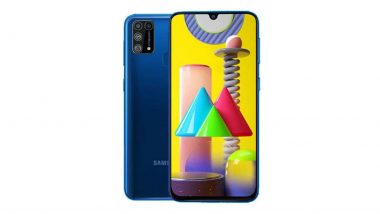 The South Korean technology giant Samsung could launch a new smartphone in India. The upcoming Galaxy M32 has received the BIS (Bureau of Indian Standards) website. Previously, the phone was spotted on Geekbench that gave out key specs ahead of its official debut. It will be introduced in the country as a successor to the Galaxy M31, which bagged a good amount of response from the domestic market. Samsung Galaxy M32 Specifications Leaked via Geekbench Listing.

The phone is expected to sport better cameras, better display, improved hardware, Android 11 OS based on OneUI OS, and more. It is important to note that the BIS listing doesn’t reveal any new details, but it is safe to say that the phone is likely to arrive in the country very soon.

If the market reports are to be believed, the upcoming Samsung phone could get a MediaTek Helio G80 Soc that will be paired with 6GB of RAM. It might get a massive 6,000mAh battery and could run on Android 11 based One UI out of the box. As of now, there are no concrete details about the launch details. We can expect an official announcement soon from the company.

(The above story first appeared on LatestLY on May 01, 2021 11:18 PM IST. For more news and updates on politics, world, sports, entertainment and lifestyle, log on to our website latestly.com).