G20 Virtual Summit on Coronavirus: 'World's Leading Economies Will Do Whatever It Takes to Overcome Pandemic', Says Joint Statement

The joint statement issued by G20, following the virtual summit, said the world's leading economies "will do whatever it takes to overcome the coronavirus pandemic", further adding that combating the pandemic and the social and economic disasters linked to it is their "absolute priority." 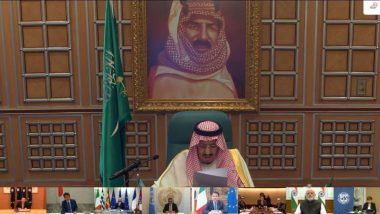 Riyadh, March 26: The leading economies of the world will undertake all possible measures in "overcoming the pandemic", said the statement issued by G20 following the virtual summit on coronavirus outbreak. The resolution was agreed upon by heads of states who attended the video conference organised by the Kingdom of Saudi Arabia - which currently holds the presidency of G20 summit. Catch all live news updates related to the coronavirus pandemic in India and other parts of the world.

King Mohammed Salman bin Abdulaziz al Saud, who presided over the emergency conference called on COVID-19, appealed all members of the first world to unite in their efforts in curbing the spread of coronavirus. The crisis requires a global response on war-footing, the King said, adding that all nations in the world have no other option but to cooperate and work together.

"We should all take responsibility in funding research and development projects aiming to reach a vaccine for the coronavirus," King Salman said. The Saudi regime has donated $10 million to the World Health Organisation (WHO) as part of the COVID-19 emergency fund.

The joint statement issued by G20, following the virtual summit, said the world's leading economies "will do whatever it takes to overcome the coronavirus pandemic", further adding that combating the pandemic and the social and economic disasters linked to it is their "absolute priority."

The virtual summit was convened by Riyadh to formulate a joint strategy to secure the health of citizens across the globe. Among the foremost aims of the videoconference was also to boost coordination to prevent the world from slipping into a world recession. The member nations would also be following up their their diplomatic channels to avert the situation of global food shortage.

The coronavirus pandemic is expected to level a lethal blow on economies across the globe. The securities market are already in a state of freefall, with fears raised of whether the world would witness a repeat of the 2008 global economic crash.

Even as the first world, including several among the G20 members, are punched by the coronavirus outbreak, the onus lies on them to rescue the developing nations, said the World Health Organisation (WHO).

Apart from making an appeal to the developed nations, WHO chief Tedros Adhanom Ghebreyesus also mentioned India in his presser, saying that the nation can play an instrumental role in flattening the curve of coronavirus. "India has the capacity, and it's very important and good to see that India is taking early measures. This will help you to suppress and control it as soon as possible before it gets serious," he said.

Globally, the pandemic has so far claimed 22,071 lives and affected 488,328 persons, as per the latest updates. The bulk of the fatalities, nearly 15,000, have been reported in Europe, with Italy accounting for over 7,500 deaths, followed by Spain, Germany and France. A total of 117,608 have also recovered from the disease so far.

(The above story first appeared on LatestLY on Mar 26, 2020 08:24 PM IST. For more news and updates on politics, world, sports, entertainment and lifestyle, log on to our website latestly.com).