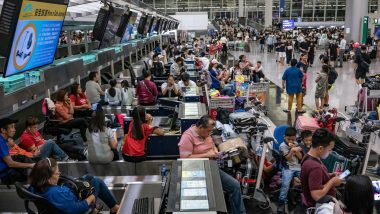 Hong Kong, June 25: With China pushing ahead with the implementation of the national security law on the Hong Kong, the residents are making preparations to flee to Taiwan and other countries fearing persecution.

Since last year, the number of applications for police certificates required to migrate to some other country has soared almost 80 per cent to nearly 21,000 in the latter half of 2019 from a year earlier, The Washington Post reported. China Approves Plan to Impose Hong Kong Security Law Amid Tensions with US.

The protesters fearing persecution are also seeking refuge in Germany, the Netherlands and the United States. "You don't know what they can accuse you of under the new law...Would joining a strike be considered a subversion of state?" The Washington Post quoted Ho, a nurse at a hospital rehabilitation ward in Hong Kong.

Not fearing retaliation, she had joined a protest urging the pro-China government to close it borders with China amid coronavirus pandemic. The strong-faced lady, however, now has to flee Hong Kong due to the impending national security law.

The family will be migrating to Taiwan via its programme for foreign professionals. Her husband who is uncertain about his future in Taiwan, as it lacks a good financial sector, was quoted as saying that he is ready to even work in a restaurant because "Having my freedom of speech is worth more." "In many ways, it feels like we are refugees, fleeing a war," he added.

While Taiwan is welcoming the fleeing Hong Kongers with open arms, China has warned Taipei of serious retaliation for offering protection to "rioters", Al Jazeera reported. Recently, Hong Kong Free Press quoted Taiwan President Tsai Ing-wen as saying: "The Executive Yuan will propose a comprehensive and concrete plan as soon as possible. The plan includes Hongkongers' right of abode and settlement..If the situation in Hong Kong worsens, and its autonomy and human rights are further suppressed, we will resolutely voice our concerns... We will continue to support Hongkongers' determination to strive for democracy and freedom which are paramount to its peace and stability."

The NHK World reported that the Taiwan government will be setting up a dedicated officer to support the Hong Kong citizens migrating to Taipei for political or other reasons. The office will help cover living expenses for needy people, give consultation services for schooling, job-hunting, and starting businesses.

Reacting to this, the Chinese government was quoted as saying in a statement, "Providing shelter for and taking onto the island the rioters and elements who bring chaos to Hong Kong will only continue to bring harm to Taiwan's people."