Giorgia Meloni would be the first woman ever to serve in this role, and would lead the most right-wing government in Italy's post-war history. 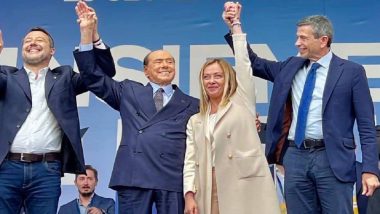 Rome, September 27: A right-wing coalition scored a broad victory in Italy's general election to form a new parliament, official results showed. As vote counting concluded in 99 per cent of polling stations across the country, nationalist Brothers of Italy was put at 26 per cent of the vote, according to data provided by the Interior Ministry on Monday evening. As such, its leader Giorgia Meloni would most likely become the country's next Prime Minister. If so, she would be the first woman ever to serve in this role, and would lead the most right-wing government in Italy's post-war history, Xinhua news agency reported. Who Is Giorgia Meloni? Know Everything About Brothers of Italy Leader Who Could Become Italy's First Female Prime Minister.

The Brothers of Italy campaigned in coalition with two allies, the League party and centre-right Forza Italia party, which gained some 8.7 per cent and 8.1 per cent, respectively. Therefore, their weight in the next government was expected to be less pivotal than that of Meloni's party. "Italians have entrusted us with a relevant responsibility, and it will be our task to not let them down and to make our best to restore the nation's dignity and pride," Meloni said on her official Facebook page on Monday. Mario Draghi Resigns As Italy Premier After Government Implodes.

"We will aim at unifying and at highlighting what can bring us close, not what divides us," she added. Her main contender, the centre-left Democratic Party (PD) led by Enrico Letta got 19 per cent of the votes and conceded defeat. "We are going to make the necessary assessment in the next days, since it is clear mistakes (in their campaign) have been made," Letta said. Letta also announced that he would lead the party until its next Congress, which will be held "as soon as possible," and step down after a new leader is chosen.

While the right-wing coalition all together gained between 43.7 per cent and 44 per cent of seats, the centre-left alliance -- made of PD and three minor allies -- won some 26 per cent. This means the next right-wing government will be able to control a broad majority of seats in both Chamber of Deputies and the Senate. Populist Five Star Movement won over 15 per cent, and its leader Giuseppe Conte said they would serve as opposition party in the next parliament.

A fourth contender -- a centrist alliance made of two small forces forged shortly before the campaign began -- reached 7.7 per cent overall. Its leader Carlo Calenda announced that it would not side either with the right-wing coalition or with the centre-left, and "will be opposition in parliament, but constructively". Over 50 million citizens, including nearly 4.7 million living abroad, were eligible to choose the 400 deputies and 200 Senators that will form the next parliament. Voter turnout was the lowest ever registered in the country's post-war history, the Interior Ministry said.

The new parliament is scheduled to gather for the first time on October 13, and lawmakers will elect the two Houses' Speakers in the first meeting. After that, political consultations would begin between President Sergio Mattarella and all parties' leaders in order to form the next government.

(The above story first appeared on LatestLY on Sep 27, 2022 01:21 PM IST. For more news and updates on politics, world, sports, entertainment and lifestyle, log on to our website latestly.com).