US President Joe Biden announced that he "applauds the overwhelming vote" by the UN General Assembly to suspend Russia from the Human Rights Council in the wake of Moscow's ongoing war on Ukraine. 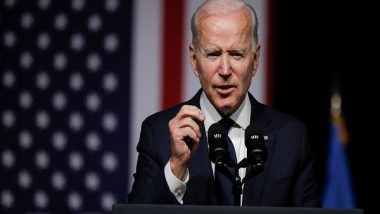 Washington, April 8: US President Joe Biden announced that he "applauds the overwhelming vote" by the UN General Assembly to suspend Russia from the Human Rights Council in the wake of Moscow's ongoing war on Ukraine.

In a statement issued by the White House on Thursday night, Biden said: "This is a meaningful step by the international community further demonstrating how (Russian President Vladimir) Putin's war has made Russia an international pariah.

"The US worked closely with our Allies and partners around the world to drive this vote because Russia is committing gross and systemic violations of human rights. "Russian forces are committing war crimes. Russia has no place on the Human Rights Council. UNGA Suspends Russia From Human Rights Council; India Abstains on Vote.

"After today's historic vote, Russia will not be able to participate in the Council's work or spread its disinformation there as the Council's Commission of Inquiry investigates Russia's violations and abuses of human rights in Ukraine."

The US President called the images that have surfaced from the destroyed Ukrainian cities, including Bucha where a mass grave was found with over 300 bodies, were "horrifying" and "an outrage to our common humanity".

As Russia's "lies are no match for the undeniable evidence of what is happening in Ukraine", Biden called on all nations to condemn Moscow's "unprovoked and brutal aggression against Ukraine and support the brave people of Ukraine in their fight for freedom".

"We will continue to work with responsible nations around the world to gather evidence to hold Russia accountable for the atrocities being committed, increase the pressure on Russia's economy, and isolate Russia on the international stage," Biden was quoted as saying in the statement.

Thursday's resolution, proposed by the US, Ukraine and their allies, came after stark images and horrific narratives of killings and atrocities emerged from Bucha after Russian troops withdrew from the Ukrainian town.

It received 93 votes, while 24 countries voted against it, 58 abstained and 18 stayed away entirely from the voting.

Immediately after the vote, Russia announced that it was voluntarily withdrawing from the 47-member Council. Russia's Deputy Permanent Representative Gennady Kuzminin denounced the resolution as an "attempt by Western countries and their allies to destroy the existing human rights architecture". Russia-Ukraine War: Ukrainian Citizens Kill Russian Soldiers By Feeding Them Poisoned Cake and Alcohol, Says Report.

The UN General Assembly's 2006 resolution setting up the Council allows for a country to be suspended if it carries out gross and systematic violations of human rights.

The only other suspension of a member of the Council was in 2011 when the Assembly voted to temporarily remove Libya then ruled by Muammar Gaddafi.

(The above story first appeared on LatestLY on Apr 08, 2022 09:12 AM IST. For more news and updates on politics, world, sports, entertainment and lifestyle, log on to our website latestly.com).