Melbourne Couple Jailed For Enslaving Indian Woman For Eight Years in Their House in Mount Waverley; Judge Calls It 'Absence of Humanity' 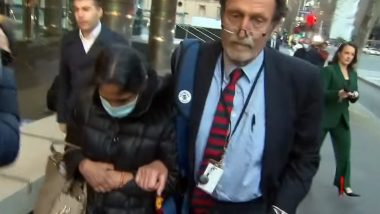 Melbourne, July 21: A Melbourne couple was sentenced to jail for keeping an Indian woman as a slave for eight years in their house in Mount Waverley. Fifty-three-year-old Kumuthini Kannan has been sentenced to eight years of imprisonment, and her 57-year-old husband Kandasamy Kannan has been jailed for six years. Both husband and wife are natives of Sri Lanka. Justice John Champion of the Victoria Supreme Court called it the "absence of humanity." Canada Immigration Racket Busted in Goa, Gang of 12 from Haryana Arrested.

The court found the 53-year-old woman more morally culpable than her husband. As per the Victoria Supreme Court, Kumuthini has to serve at least four years in jail, while her husband has to serve at least three years of jail term. According to a report published in The Guardian, the court observed that Kandasamy was having a weak character was dominated by his wife. "No one has expressed any sense of regret or sorrow – it's a fairly remarkable absence of humanity," reported the media house quoting Justice Champion as saying. Indonesia: Woman Rescued From a Cave After Being Kept as a Sex Slave for 15 Years.

The pair enslaved the woman for eight years between 2007 and 2015. According to reports, the woman was forced to cook, clean, and take care of the couple's children. The matter surfaced after she collapsed and was taken to hospital. At that time, she weighed only 40 kg and was suffering from diabetes and sepsis. The victim was from India's Tamil Nadu and had come to Australia to work for the couple.

The victim had come to Australia twice in 2002 and 2005 to live with the couple. However, she came in 2007 on a one-month tourist visa but was not able to return this time. Reports claimed that the victim was forced to work for 23 hours and, in exchange, was paid only $3.36. She was also reportedly beaten and was not given proper food by the couple. The couple also lied about the woman's identity while admitting her to the hospital. The woman is now is in her 60s and is living in a nursing home.

(The above story first appeared on LatestLY on Jul 21, 2021 12:58 PM IST. For more news and updates on politics, world, sports, entertainment and lifestyle, log on to our website latestly.com).