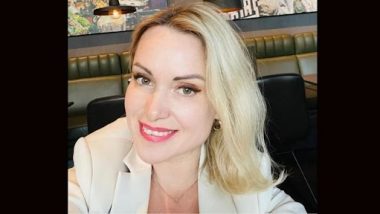 Ovsyannikova, who has already had to pay several fines for her criticism of Russia's war on Ukraine, faces a long prison sentence. According to Zakhvatov, the house searches could be related to Ovsyannikova's recent protest, where she held up a placard reading "Putin is a murderer, his soldiers fascists" in the centre of Moscow within sight of the Kremlin. Russia-Ukraine War: Russian Journalist Dmitry Muratov Sells Nobel Prize for Ukrainian Children.

Under the tightening of the law, acts that discredit the Russian armed forces can be punished with a prison sentence of up to 15 years. Ovsyannikova, as an employee of Russian state television, had displayed a protest poster against the war in a live broadcast in March.

It read: "Stop the war. Don't believe the propaganda. You are being lied to here." The editor, who until then had been considered loyal to the official line, received worldwide recognition for this. After the action, she lived abroad for a while and reported for the German newspaper Die Welt.

(The above story first appeared on LatestLY on Aug 10, 2022 04:19 PM IST. For more news and updates on politics, world, sports, entertainment and lifestyle, log on to our website latestly.com).