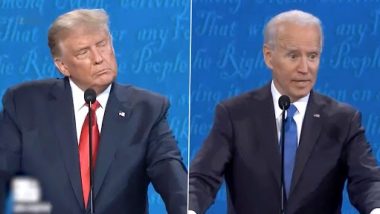 Washington, October 23: US President Donald Trump and his Democratic rival Joe Biden on Friday participated in their second and final presidential debate ahead of the upcoming US Presidential Elections 2020. The final debate was being moderated by NBC News White House correspondent Kristen Welker in in Nashville, Tennessee. Welker is the first Black woman to moderate a presidential debate since Carole Simpson in 1992. Taking queue from the first meeting where Trump repeatedly interrupted Biden, the organisers had muted both Trump and Biden while the other delivered responses. US Elections 2020 Calendar: Presidential Debates, Polling, Results and Inauguration Day — Key Dates to Mark.

Key Highlights of US Presidential Debate:

The moderator brought up COVID-19 as the first topic:

Joe Biden said if he is elected the next US President, he will end the pandemic. While speaking during the debate, Biden told Americans, "We're in a circumstance where the President thus far has no comprehensive plan. I would make sure we move in a direction where people wear masks, we have rapid testing, we have national standards on opening up schools and businesses. Folks, I will take care of this, I will end this, I will make sure we have a plan”.

Trump on COVID-19: US President Donald Trump says it is a worldwide pandemic and assured that the US will soon have a vaccine. “From personal experience, I had it. I was in the hospital. I got better very fast, and now they say I'm immune. More and more people are getting better," he said. During the first part of this debate, Trump announced that it may be unlikely that a vaccine will be unavailable before the November 3 election. He also said it would likely be distributed "by the military."

After COVID-19 pandemic, the Trump and Biden held a discussion on taxes. "I prepay millions and millions of dollars in taxes," Trump said, adding that,  "I paid in advances, it's called prepaying..."  On Trump’s statement, Biden replied saying, "Show us. Stop playing around. Show us. What we do know, is that you're not paying taxes, or your payment is so low. Come on!"

During the debate, Donald Trump tells Biden, "I ran for US President because of you. I ran because you did a bad job. If you had done a good job, I would not have run for president." To this, Biden responds, "Our character is on the ballot. Look at us closely."

Donald Trump, while speaking on the issue of climate change, said look at China, Russia and India, the air is filthy. “We have the best lowered number in carbon emission”, Trump said.

Joe Biden slams Trump over migrant family separations at the border to which Trump replied saying. “I am least racist person in this room”. Trump defended separating kids who remain away from their families following detentions along the US-Mexico border. Trump said that children are often brought across the border not by families but ‘by coyotes and lots of bad people.’

Taking a jibe at Trump, Biden said, “I will make China play by rules, Trump makes friends with ‘thugs’ like Putin and Kim”. He added saying, “My son has not made any money from China, only President Trump did”.

The debate held today in Nashville, was to be the third and final debate. However, the actual second debate, which was to take place in Miami on October 15, was called off. This means the Nashville debate will be the second time Trump and Biden will be facing off.

(The above story first appeared on LatestLY on Oct 23, 2020 08:51 AM IST. For more news and updates on politics, world, sports, entertainment and lifestyle, log on to our website latestly.com).