China has reported 42 new coronavirus cases, including 38 imported infections, taking the total tally to 81,907, health officials said on Friday, as the country started a new trial of re-testing the recovered COVID-19 patients amid heightened concern of a rebound of the deadly disease. 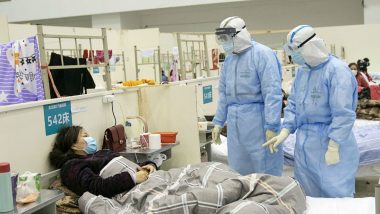 Beijing, April 10: China has reported 42 new coronavirus cases, including 38 imported infections, taking the total tally to 81,907, health officials said on Friday, as the country started a new trial of re-testing the recovered COVID-19 patients amid heightened concern of a rebound of the deadly disease.

The Chinese health authority on Friday also said that 47 new asymptomatic coronavirus cases, including 14 from abroad, were also reported in the mainland. US Records 1,783 Coronavirus Deaths in Past 24 Hours, Toll Crosses 16,500 in Country.

As the new infections continue to increase, China on Thursday unveiled a new trial protocol warranting re-testing of the recovered coronavirus patients besides intensifying the screening of asymptomatic cases as concerns grew over a second wave of the infections in the country.

The move comes a day after China lifted the 76-day lockdown in Wuhan, where the pandemic originated. One death was reported in coronavirus epicentre Hubei Province taking the overall death toll in the country to 3,336, while the overall confirmed cases on the mainland reached 81,907 by Thursday. This includes 77,455 patients who were discharged after treatment.

The NHC said 1,097 asymptomatic cases, including 349 from abroad, were still under medical observation. Asymptomatic cases refer to people who are tested positive for the coronavirus but develop no symptoms such as fever, cough or sore throat but they are infectious and pose a risk of spreading to others, according to a new official notification.

The new trial protocol on recovered COVID-19 patients included return visits by doctors, re-testing and their health monitoring. As of Thursday 77,455 patients were discharged after treatment, most of them were from Wuhan and Hubei province which bore the brunt of the virus.

According to the protocol, recovered COVID-19 patients should stay in quarantine for 14 days either at home or in an isolation centre for medical observation, the state-run Xinhua news agency reported.

During the isolation period, those having recovered from the disease should take their temperatures daily and be on the lookout for fever and respiratory symptoms, including cough and breathing difficulties, the protocol said.

Designated hospitals should make plans for patients' return visits and re-testing for the next two to four weeks following their discharge, it said, adding that sputum samples are more reliable and should be the first choice for re-testing.

A high-powered committee headed by Chinese Premier Li Keqiang which was leading the efforts to contain the virus since January has also called for intensified detection and prompt response to asymptomatic case meaning people infected with coronavirus but showed no symptoms.