Get latest articles and stories on Entertainment at LatestLY. Ben Affleck and Jennifer Garner's 10-year-old son Samuel got into a minor mishap when he got onto the driver's seat of a yellow Lamborghini and bumped into a parked BMW. 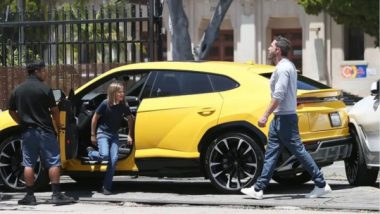 Los Angeles [US], June 28 (ANI): Ben Affleck and Jennifer Garner's 10-year-old son Samuel got into a minor mishap when he got onto the driver's seat of a yellow Lamborghini and bumped into a parked BMW.

The incident took place while at a car dealership in Los Angeles. However, the 10-year-old is currently fine after the accident, confirmed E! News.

Much to Affleck's relief, there hasn't been any kind of casualty reported from the incident. "This is no damage. Everyone is fine," Affleck's representative told E! News.

According to a video of the accident obtained by TMZ, Samuel was out with Affleck and Jennifer Lopez when he was seen sitting in the driver's seat. The actor stood outside the car, which retails for more than USD 230,000, while his fiancee got into the backseat. After the incident, Samuel exited the car to inspect the damage.

"When (Samuel) got into the car, it jerked back and forth. We have a small lot and the cars are close. Everybody was OK!", a dealership employee revealed.

The outing was another moment for Affleck, also father to daughters with his ex-wife Violet, 16, and Seraphina Rose, 13, to join his son and Jennifer Lopez.

As per reports from E! News, since reconciling their romance last year, Lopez and Affleck have been effortlessly blending their families. A source close to the singer told last August, "J.Lo has made a big effort to get to know Ben's kids and welcome them into her home and her life. They have spent a lot of time getting to know each other and letting the kids have fun and bond." (ANI)