On Friday, producer Mahaveer Jain announced a biopic on the life of popular comedian Kapil Sharma. 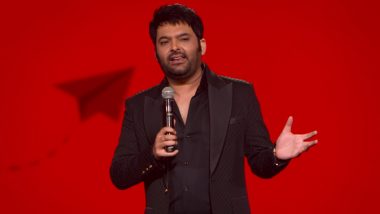 On Friday, producer Mahaveer Jain announced a biopic on the life of popular comedian Kapil Sharma. Fukrey fame Mrighdeep Singh Lamba has come on board to helm the upcoming project titled Funkaar. Cardi B Says She Felt ‘Extremely Suicidal’ as She Testifies Against YouTuber in Libel Trial.

Talking about the film, Mahaveer Jain said, "Billions of people get their daily dose of dopamine, courtesy Kapil Sharma. We all need love, life and laughter. We are proud to present comedy super star Kapil Sharma's untold story on the big screen, in a big way." Kapil has had a long journey coming from a humble background in Amritsar to becoming one of the renowned personalities of India. After winning 'The Great Indian Laughter Challenge', Kapil appeared in 'Comedy Circus' and other comedy shows. Real Steel Series in Works at Disney+; TV Adaptation of Hugh Jackman’s 2011 Movie.

In 2016, he landed his own comedy chat show 'The Kapil Sharma Show', and since then he has been ruling the comedy space. He also tried his hand at acting with films like 'Kis Kisko Pyaar Karoon' and 'Firangi'. Now it will be interesting to see who will essay his role in his biopic.