Annular Solar Eclipse 2021 on June 10, To Be Visible Only in Some Parts of India Including Arunachal Pradesh and Ladakh

An annular solar eclipse is going to occur on Thursday but it will not be visible in India except in some parts of Arunachal Pradesh and Ladakh for a few minutes before the sunset, a prominent astrophysicist said. 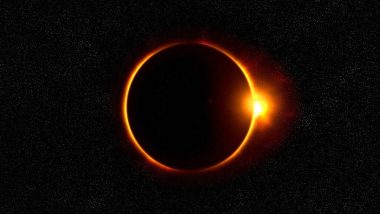 Kolkata, June 8: An annular solar eclipse is going to occur on Thursday but it will not be visible in India except in some parts of Arunachal Pradesh and Ladakh for a few minutes before the sunset, a prominent astrophysicist said.

The annular solar eclipse occurs when the sun, moon and the earth come in a straight line and almost on the same plane. It is a partial eclipse when a ring of fire appears in the sky. Solar Eclipse of June 10, 2021 FAQs: From ‘Surya Grahan Time in India’ to ‘When is The Next Solar Eclipse’, Most Asked Questions About Upcoming Celestial Event Answered.

The path of the eclipse will not touch almost any part of India, barring the North-Eastern extremes of the country in Arunachal Pradesh and Ladakh, Director of M P Birla Planetarium, Debiprasad Duari, said in Kolkata on Tuesday.

"In Arunachal Pradesh, people can see, just before the sunset, a minuscule fraction of the sun covered by the moon, that is also very low in the horizon, lasting at the most 3-4 minutes depending upon the position," Duari said.

"On the northern borders, in Ladakh, a sliver of land in the border region can experience the last phase of the partial eclipse, again for a short duration, but relatively at a higher altitude than the eastern part of the country," he said.

One can see a very small part of the solar eclipse from the vicinity of Dibang Wildlife Sanctuary in Arunachal Pradesh at around 5:52 pm. In the northern part of Ladakh, where the sun will set at around 6.15 pm, the last phases of the phenomenon can be seen at around 6 pm.

The eclipse can be seen from a vast region of North America, Europe and Asia, Duari said. First, the partial eclipse will start at around 11:42 am Indian Standard Time and the annular eclipse will appear to occur from 3:30 pm and will continue up to 4:52 pm, though for different intervals for a particular region, depending upon one's geographical location.

The partial eclipse will end at around 6:41 pm IST, he said. Live coverage of the eclipse is being arranged by various organisations around the world.