Solar Eclipse of June 10, 2021 FAQs: From ‘Surya Grahan Time in India’ to ‘When is The Next Solar Eclipse’, Most Asked Questions About Upcoming Celestial Event Answered

The first solar eclipse of 2021 will occur on June 10. A Solar eclipse 2021 approaches, we bring some FAQs about the annular celestial event. 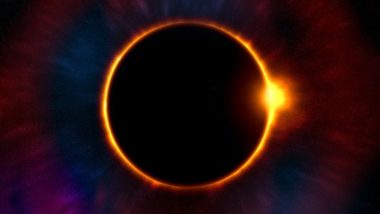 The first solar eclipse of 2021 will happen on June 10. During the eclipse, the moon will get in the way of the Sun and the Earth while blocking the sunlight from reaching the Earth. When one celestial body such as a planet or moon moves into the shadow of another celestial body, an eclipse takes place. This year, we will be witnessing the first-ever solar eclipse of 2021 on June 10. This will be an annular solar eclipse and during the eclipse, it will show a ‘ring of fire’. In general, there are three types of eclipses - total, partial and annular.

The first solar eclipse of 2021 may start around 1:42 pm IST and conclude at 6:41 pm. When the moon covers the sun's center while leaving the outer edges visible as a ‘ring of fire’, an annular solar eclipse happens. This time the eclipse is going to appear as a 'ring of fire'. According to the National Aeronautics and Space Administration (NASA), the Moon isn't close enough to Earth; thus, it won’t be able to block all the sun lights from reaching the Earth.

When Will Be ‘Surya Grahan’ 2021 Visible in India?

The solar eclipse is called Surya Grahan in India. Reportedly, this time it will not be visible in the entire country. Only people of Arunachal Pradesh and Ladakh can witness the solar eclipse 2021 while others can watch the eclipse via webcam. The popular portal timeanddate.com has also published the live stream link.

People are advised to use protective solar eclipse-viewing glasses or binoculars or telescopes to watch this rare phenomenon. It is advisable not to watch the solar eclipse 2021 with naked eyes.

In Which Other Places the Solar Eclipse 2021 Can Be Watched Properly?

According to NASA, people living in some parts of Canada, Greenland, and Russia will be able to witness the eclipse properly. Cities like London, Toronto, New York, and Washington DC will witness a partial eclipse. However, the people living in New York will get to see more than 70 percent coverage of the Sun.

When Will Be the Next Solar Eclipse?

(The above story first appeared on LatestLY on Jun 08, 2021 04:26 PM IST. For more news and updates on politics, world, sports, entertainment and lifestyle, log on to our website latestly.com).