So far, 9,152 people have died from the infection in the state, which has reported 6,92,015 cases since the outbreak of the pandemic. 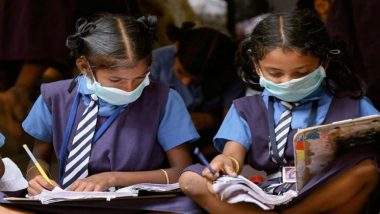 Lucknow, April 11: The Uttar Pradesh government on Sunday ordered the closure of all schools till April 30 and directed the imposition of a night curfew in the districts, which report 100 new infections in a day or have 500 active cases. According to a government statement, the government also ordered that not more than 100 people be allowed to assemble at an open space for an event while the number has been put at 50 for closed spaces.

Earlier, a night curfew was imposed in Kanpur, Gorakhpur, Gautam Buddh Nagar, Allahabad, Meerut, Ghaziabad, Bareilly, Muzaffarnagar districts and the Lucknow civic body area. On April 2, the UP government had extended till April 11 the closure of all schools for students of Classes 1 to 8. UP Records Highest-Ever Single-Day Spike of 15,353 New COVID-19 Cases Since Outbreak, 67 Deaths in Past 24 Hours.

According to the statement issued on Sunday, all government and private schools will remain closed till April 30 while pre-scheduled examinations can be held. Uttar Pradesh Chief Minister Yogi Adityanath Adityanath said a night curfew be imposed from 9 pm to 6 am in the districts that report 100 fresh cases in a day or have 500 active COVID-19 cases.

Stressing the need to focus on the “test, trace and treat” approach, the government said the daily count of RT-PCR tests should be taken to one lakh.

Tracing of at least 30-35 persons who have come in contact with a COVID-19 patient should be done, the directives said. Uttar Pradesh Reports 15,353 New COVID-19 Cases in Past 24 Hours.