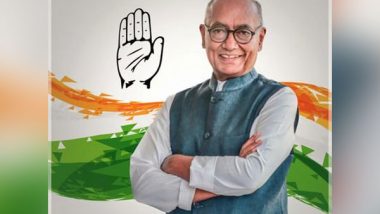 Singh was addressing a protest held here on Saturday against the policies of the Central government, which saw the participation of 19 opposition parties

Alleging that BJP and RSS have been for ages dividing people of India, Singh appealed to all the opposition parties to come on one platform to fight them.

"The country is ruled by those people whose ideology we have been fighting since the beginning. And today the time has come when all the parties, who are against the ideology of BJP and Sangh to come on one platform," said Singh.

The Congress leader also said that the Muslim League too did not participate in the fight for India's freedom.

".... we have seen that neither the Sangh nor the Muslim League took part in the freedom struggle," he added.

Speaking on the Farmer Bills, Singh said that the anti-farmer laws want to capture the country's 20 lakh crore business.

"They will be eliminating the Mandis by implementing three laws and the small farmers by doing contract farming," said Singh.

"Make a law for hoarding because the big trader is not able to get the license in the small market. This law was not there even during the British era. Now the law should be opposed," he added. (ANI)