US vice president-elect Kamala Harris' ancestral village in India made a 'rangoli' to congratulate her on election win on Sunday. 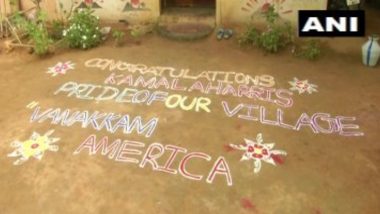 Tiruvarur, November 8: US vice president-elect Kamala Harris' ancestral village in India made a 'rangoli' to congratulate her on election win on Sunday.

Women in Thulasendrapuram village in Tiruvarur district of Tamil Nadu, the native village of US vice president-elect Kamala Harris, drew a special colourful 'rangoli' to congratulate her. The message says, 'Congratulations Kamla Harris, pride of our village,' along with 'Vanakkam America'. In addition to this, locals in Thulasendrapuram celebrated her win by putting up posters, distributing sweets, and burning firecrackers.

Tiruvarur: Women in Thulasendrapuram, the native village of US Vice President-elect Kamala Harris make 'rangoli' to congratulate her on #USElection win.#TamilNadu pic.twitter.com/Zn1YzOaAJW

She has broken many glass barriers by becoming the first woman and Indian Americanto be elected as the US vice president.

The village has been news since the day, Democratic candidate Joe Biden chosen Kamla Harris as his running mate and vice presidential nominee.

Harris was born to a Jamaican father and an Indian mother Shyamala Gopalan, who was born in Chennai before she moved to the US for further study.

Shyamala was a leading cancer researcher and activist. Harris's maternal grandfather was born in Thulasenthirapuram, located about 320 km south of the city of Chennai. Shyamala was the daughter of PV Gopalan, a high-ranking civil servant.

Fifty-five-year-old Kamala Harris began her career in the 1990s at the Alameda County District Attorney's Office in the city of Oakland and later became the first woman of colour in 2011 to serve as California's attorney general.