Maharashtra's new Deputy Chief Minister Devendra Fadnavis on Tuesday held a roadshow in Nagpur after he received a warm welcome upon his arrival in the city. 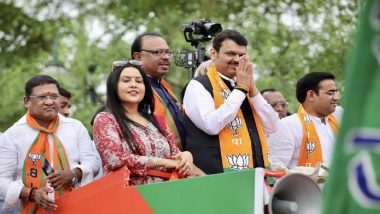 Nagpur, July 5: Maharashtra's new Deputy Chief Minister Devendra Fadnavis on Tuesday held a roadshow in Nagpur after he received a warm welcome upon his arrival in the city.

Fadnavis arrived at the Nagpur airport to visit his home after his recent victory in the government formation in the state, from where he took out a road show from the airport. Maharashtra Rains: CM Eknath Shinde Speaks To Chief Secretary Manukumar Srivastava; Discusses Heavy Rainfall And Flood Situation In State.

"The people of Nagpur have always given me love and elected me five times. Today I have come to Nagpur for the first time after becoming Deputy Chief Minister. I express my gratitude to the people who have come to show their love for me," the Deputy Chief Minister said. Fadnavis' visit came a day after the Eknath Shinde-BJP alliance won the vote of trust in the state Assembly.

The new Eknath Shinde-led government in Maharashtra won the floor test on Monday by a 164-99 margin, proving his government's majority and cementing his position as chief minister of the state and the leader of the Shiv Sena. 164 votes were polled in favour of Shinde, while 99 votes were polled against the newly formed BJP-Shinde camp coalition.

Shiv Sena MLA from Shetkari Kamgar Paksh of Uddhav Thackeray faction Shyamsundar Shinde also voted in favour of Maharashtra CM Eknath Shinde in the trust vote today. He did not join the Shinde faction but voted in their favour.

The trust vote comes a day after BJP's Rahul Narwekar was elected the Assembly Speaker. On Sunday Narwekar reinstated Shinde as the Shiv Sena's legislative party leader and also recognised the appointment of Gogawale as the chief whip of the Shiv Sena.

The floor test was held during the special two-day session of the Legislative Assembly that began on Sunday. A total of three members abstained from voting.

Soon after the Trust Vote ended, Shiv Sena leader and earlier whip Sunil Prabhu raised the issue of whip but Speaker interrupted him and asked him to sit and said he has already everything on record.

Eknath Shinde, who led a revolt against Shiv Sena leading to the collapse of the 31-month-old Maha Vikas Aghadi (MVA) government, took oath as the Chief Minister of Maharashtra on June 30.