Get latest articles and stories on India at LatestLY. Former Union Minister Ashwani Kumar on Saturday claimed that many leaders will leave the Congress soon, and party interim president Sonia Gandhi knows the reason for this. 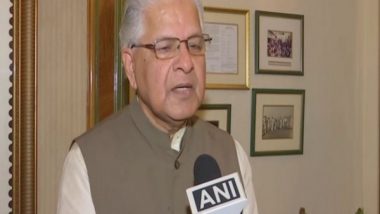 New Delhi [India], May 14 (ANI): Former Union Minister Ashwani Kumar on Saturday claimed that many leaders will leave the Congress soon, and party interim president Sonia Gandhi knows the reason for this.

The Former Union Minister claimed that if leaders do not get respect within the party, they might leave. He said that the leadership should review why the leaders are leaving the party and should resolve the issues within it.

"If there is anything to discuss in the Udaipur Chintan Shivir, it should be why one leader after the other is leaving the party. Sonia Gandhi is intelligent and if the party is not reformed by her, it will be difficult to save the Congress. The party leadership should talk to its angry leaders, and remove their discontentment," he added.

This comes after the disgruntled leader and former Punjab party chief Sunil Jakhar, who was stripped of all posts previously, quit the Congress today during a Facebook Live. He asked party chief Sonia Gandhi whether she wasn't aware that he held no position in the party and yet was issued a show-cause notice.

Jakhar also questioned senior party leaders Tariq Anwar, JP Aggarwal, and Ambika Soni, who are members of the Congress Disciplinary Committee for serving him the notice. He lashed out at Ambika Soni and asked how can she be a part of the committee against him when she is the one who made the allegations of indiscipline against him.

On April 11, Congress leaders KV Thomas and Sunil Jakhar were issued show-cause notices for breaching party discipline and were asked to reply within a week. However, Jakhar did not respond to the notice.