Petitioner Union through Advocate Satya Sabrawal also seeking directions for a Court-monitored investigation in the disinvestment process/methodology of the PHL adopted by the respondents and stated it is arbitrary and unconstitutional. 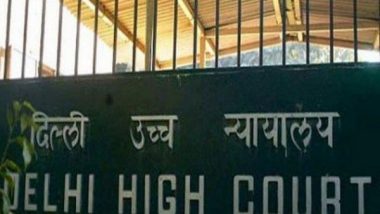 New Delhi, May 14: All India Civil Aviation Employees Union has moved Delhi High Court seeking its direction to set aside the impugned notice inviting expression of interest dated December 8, 2020 issued by the Central government for the proposed strategic disinvestment of the entire equity shareholding of 51 per cent in Pawan Hans Limited (PHL). Petitioner Union through Advocate Satya Sabrawal also seeking directions for a Court-monitored investigation in the disinvestment process/methodology of the PHL adopted by the respondents and stated it is arbitrary and unconstitutional.

Advocate Satya Sabarwal in the petition submitted that PHL is not a burden on the Central Government or to the public exchequer by any stretch of argument. The Union government erred in treating PHL like other loss-making CPSEs. The plea further stated that Pawan Hans Limited has been consistently making a profit and paying dividends to the Central government. Delhi High Court Issues Fresh Notice to Vivek Agnihotri, Others on 2018 Suo Motu Contempt Case.

All India Civil Aviation Employees Union alleged that the winning bidder i.e. M/s Star9 Mobility Private Ltd, a consortium consisting of M/s Big Charter Private Limited has just two ATR Aircraft [Own 26 per cent of the SPV] and M/s Maharaja Aviation Private Limited [Own 25 per cent of the SPV] has three Robinsons [Smallest helicopter with the capacity of passengers used for student or wedding purposes] and M/s Almas Global Opportunity Fund SPC [Own 49 Percent of the SPV], an opportunity fund set up under the jurisdiction of Cayman Island has no expertise or knowledge of the aviation industry. Marital Rape Criminalisation Case: Delhi High Court Passes Split Verdict in the Case That Challenged Exception of Section 375.

Petitioner Union further saw that the proposed disinvestment is inimical to the interests of the employees, who have been on the payrolls of PHL for decades and who have given up other career options because they wanted to be a part of a Central PSU. Furthermore, as per the balance sheet of Pawan Hans Limited the amount to be received from other states [Trade receivables] alone till March 31, 2021, is Rs 177 crores and as per the knowledge of the petitioner, the same is over Rs 230 crores for the Financial Year 2022.

The same is not accommodated for the purpose of valuation by the Respondents for the purpose of disinvestment, said the plea. The plea also submitted, that Pawan Hans has leased six helicopters for its offshore business in FY 2021-22, and with respect to the same Rs 40 crores is the security deposits, which have not been accommodated in the valuation of the Pawan Hans Limited.