A video clip of the incident, which took place on Saturday, has gone viral on social media. 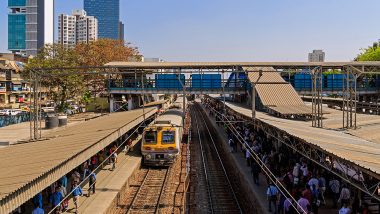 Mumbai, July 14: A woman constable caned a male commuter at Sewri railway station on Mumbai's suburban Harbour line after he allegedly teased her, police said on Wednesday. A video clip of the incident, which took place on Saturday, has gone viral on social media.

“The woman constable was on patrolling duty on the Harbour line when she noticed a man sitting in a general compartment of a local train at a railway station. She found him drinking something from a bottle,” an official said. The constable asked the man if he was an essential worker, he said, adding that she asked him to get down from the train. Central Railway Fines 2,018 People for Travelling in Mumbai Locals Using Fake ID Cards, Collects Rs 10.09 Lakh Penalty.

“But the local train started moving at that time and the man teased the constable by peeping out of the door. The local left the station, but the constable then informed the police staff at the Sewri station on the route and asked them to get the man out of the train. Sometime later, she also reached the station and caned him,” he added.