Of the three, one intensified into a deep depression and crossed the peninsula unleashing its fury over Telangana, Andhra Pradesh, Maharashtra, Karnataka and Goa and leaving a trail of destruction, damaging property and crops. 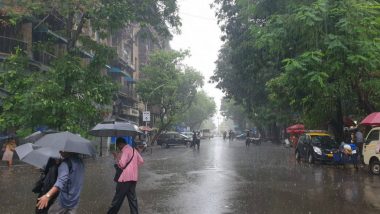 With this, the northeast monsoon, a phenomenon that brings rainfall over Tamil Nadu, Puducherry, parts of Andhra Pradesh, Karnataka and Kerala during October to December, has commenced, it said.

"In view of significant reduction in rainfall activity over most parts of the country, the southwest monsoon has withdrawn from the entire country today October 28." According to the weatherman, a cyclonic circulation lies over southwest Bay of Bengal, off north Tamil Nadu coast in lower and mid tropospheric levels.

Dry weather is expected over the rest of the country during the next four to five days.

October saw three low pressure areas -- cyclonic circulation and first stage of any cyclone -- in the Bay of Bengal. Of the three, one intensified into a deep depression and crossed the peninsula unleashing its fury over Telangana, Andhra Pradesh, Maharashtra, Karnataka and Goa and leaving a trail of destruction, damaging property and crops.

The second one developed into a depression bringing rains over West Bengal and the northeastern states last week. The southwest monsoon made an onset over Kerala on June 1, its normal annual onset date. Its timely onset was aided by cyclone Nisarga. The monsoon covered the entire country by June 26, twelve days ahead of its normal date of July 8.

Its withdrawal was also late. The southwest monsoon retreated from west Rajasthan and parts of Punjab on September 28, eleven days after its normal withdrawal date.

The normal date for the monsoon to retreat from the country is October 15.

During the four-month rainfall period, the country received 109 per cent rainfall of the long period average (LPA) with three of four months -- June (118 per cent), August (127 per cent) and September (104 per cent) -- witnessing above-normal rainfall, while July recorded (90 per cent) deficient rainfall.