Voting for the second phase of Uttar Pradesh Assembly elections for 55 seats, covering nine districts of the state, will begin on Monday at 7 am. 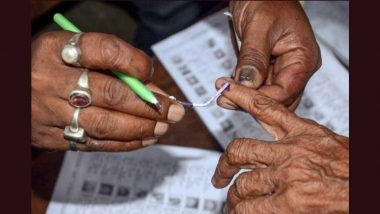 Lucknow, February 13: Voting for the second phase of Uttar Pradesh Assembly elections for 55 seats, covering nine districts of the state, will begin on Monday at 7 am.

Uttar Pradesh is going to the polls for its 55-member assembly seats in the second phase on Monday with Bharatiya Janata Party (BJP), Samajwadi Party, Bahujan Samajwadi Party (BSP) and Congress seen as the main contenders. The voting will begin at 7 am and end at 6 pm. Uttar Pradesh Assembly Elections 2022: From Nauman Masood to Suresh Khanna, Here is The List of Five Key Candidates in Phase 2.

As per the Model Code of Conduct (MCC) imposed by the Election Commission, campaigning for the state Assembly came to an end at 6 PM on Saturday.

The seats are spread across nine districts of Saharanpur, Bijnor, Moradabad, Sambhal, Rampur, Amroha, Budaun, Bareilly and Shahjahanpur. In 2017, BJP had won 38 seats out of 55, while the SP had retained 15 and the Congress had won two seats.

The BJP and Uttar Prdesh Finance Minister Suresh Khanna is in the fray from Shahjahanpur, while Jal Shakti state minister and BJP leader Baldev Singh Aulakh is contesting from the Bilaspur constituency.

Supriya Aron, former mayor of Bareilly, will be contesting from the Bareilly Cantonment from the Samajwadi Party. Notably, the SP has once again fielded Azam Khan from Rampur, who is currently lodged in Sitapur jail since February 2020, over several cases registered against him.