AAP's official Twitter handle termed this roadshow as 'AAP Gujarat Tiranga Yatra'. During the roadshow, a tableau of Delhi's world-famous Mohalla Clinic was displayed in the Ahmedabad roadshow. 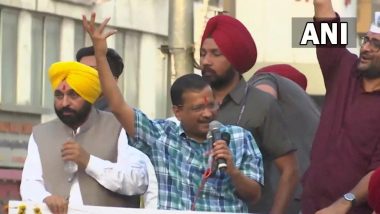 Ahmedabad, April 2: Eying the Gujarat Assembly elections that are slated to be held this year, Aam Aadmi Party's (AAP) National Convenor Arvind Kejriwal and Punjab Chief Minister Bhagwant Mann exuded confidence in winning the polls. Speaking to people during the roadshow, Mann said, "Delhi and Punjab are sorted, now we are preparing for Gujarat."

AAP's official Twitter handle termed this roadshow as 'AAP Gujarat Tiranga Yatra'. During the roadshow, a tableau of Delhi's world-famous Mohalla Clinic was displayed in the Ahmedabad roadshow.

Earlier in the day, Kejriwal and Mann visited Sabarmati Ashram in Gujarat. In a tweet in Hindi today, Kejriwal wrote, "Had the good fortune of visiting Sabarmati Ashram in Gujarat today. This ashram is a spiritual place, it seems as if the revered soul of Gandhiji resides here. Coming here gives a spiritual feeling. I consider myself blessed that I was also born in the country in which Gandhiji was born." Congress Preparing to Take Big Bet in Gujarat: Prashant Kishor's Strategy, Naresh Patel's Face?.

#WATCH | A man was saved from falling off the roof of a seemingly dilapidated house during the roadshow of AAP national convenor and Delhi CM Arvind Kejriwal along with Punjab CM Bhagwant Mann in Ahmedabad, Gujarat pic.twitter.com/ZonxMqZc5y