Get latest articles and stories on Sports at LatestLY. Union Minister for Youth Affairs and Sports Anurag Thakur inaugurated the Takshashila Sports Complex built by the Pune Municipal Corporation (PMC) at Viman Nagar on Saturday. 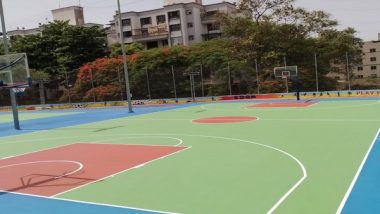 A visual of the complex. (Photo- PIB)

Underlining the importance of creating sports infrastructure at the grassroot level, Thakur appealed to the corporates in Pune to come forward and fund sports facilities through their CSR (Corporate Social Responsibility) funds.

He mentioned that India has the largest number of obese people and that a sedentary lifestyle has changed people. Hence, fitness is important for everyone, he said.

Stating that this sports complex has been built for the youngsters and common people of the area, the Minister urged "Come out of your AC rooms, practice games for half an hour here. Then you will become fit, reduce health and treatment bills, develop a liking for sports".

Speaking about developing a sports culture in the country, Thakur said, "When our children will get a chance to play, they will develop a liking for sports. Then they will go ahead on their own to win matches in the country and foreign lands". He said that a sporting tournament is a battle of nerves which shows how mentally strong a person can be.

Thakur stated that the Government attaches great importance to sports and the Centre has been working very closely with states to build grassroot level infrastructure across the country. He said budget for sports, which earlier used to be around Rs 1,200 crores has been increased to Rs 3,000 crore so that there is more fund to spend on sportspersons.

Further, under the Target Olympic Podium Scheme (TOPS), the Government of India takes full responsibility for the foreign training of elite athletes, which includes their lodging, nutrition, equipment, and international competitions in foreign countries besides a monthly stipend of Rs. 50,000/- for each athlete. "Now players only need to play and not worry about anything else. That is why they are making efforts on their own and winning medals for the country", the Minister added.

Earlier in the day, the Union Minister visited the famous Gulshachi Talim Akhada in Pune where he inaugurated a centre of the Sports Authority of India (SAI) and interacted with trainee wrestlers. SAI has adopted the maximum number of wrestling akhadas in Maharashtra. Thakur also promised to give an opportunity for Dhol-Taasha players to play at national level games.

With the objective to create international level sportsmen, Pune Municipal Corporation has developed Takshashila Sports Complex at Viman Nagar with an investment of around Rs 2.1 crore.

-International level facilities for Basketball, Volleyball and Kabaddi have been developed at the sports complex.

-There is an open-air gymnasium at the complex apart from state-of-the art facilities for the sportspersons. Similarly, a mini football ground has also been developed.

- There is a high-tech bridge connecting the sports complex and the neighbouring international level skating arena.

- A spectator gallery with a seating capacity of 1,500 will soon be developed at the sports complex built on around one-acre land.

-Arrangements are being made to train 400 sportspersons in the near future. (ANI)