The defender, who has turned out to become one of the most crucial members of the Real Madrid team, will thus bid goodbye to the club. Marcelo had a very successful time at the club and he leaves the team as their most decorated player. 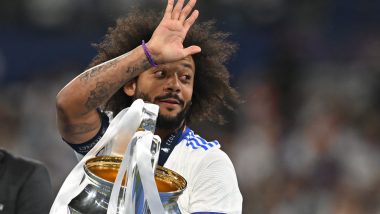 Marcelo has confirmed his departure from Real Madrid after 15 years. The Los Blancos defender has been one of the most integral parts of the club and after Real Madrid's 14th UEFA Champions League title win, he announced that he will leave the club. The Brazilian thus leaves the club as its most decorated player with a total of 25 trophies to his name. Real Madrid Players and Support Staff Erupt Into Joyous Celebrations After UCL 2021–22 Title Win (Watch Video)

The Brazilian, who is now expected to look out for opportunities elsewhere, said, as quoted by Marca, "It's a very nice moment. When you are first captain, you dream of lifting the cup and I have become the only Brazilian to lift a Champions League as captain of Real Madrid," adding, "The emotion is brutal, it was my last game with Real Madrid. But I am very happy. It's not a day of sadness, I'm leaving with a lot of joy, grateful to the fans and the magical nights I've experienced at the Bernabeu."

The left-back has had a glittering time during his stay at the club. He won five Champions League titles, five Spanish Super Cup trophies, three European Super Cups, six La Liga titles, and two Copa del Rey trophies.  He could not have asked for a better way to leave the club than to lift the Champions League title. Vinicius Junior scored the only goal of the match as Real Madrid defeated Liverpool 1-0 in the UCL final on Saturday to clinch the title.

(The above story first appeared on LatestLY on May 29, 2022 04:34 PM IST. For more news and updates on politics, world, sports, entertainment and lifestyle, log on to our website latestly.com).