Get latest articles and stories on Sports at LatestLY. World number one Ashleigh Barty dropped just five games against Camila Giorgi to reach the fourth round of the ongoing Australian Open on Friday. 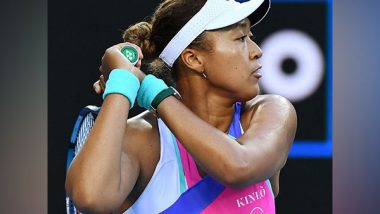 The top-seed Aussie defeated the Italian by 6-2, 6-3 in just 61 minutes at Rod Laver Arena. Looking to become Australia's first women's champion in 44 years at Melbourne Park, Barty has lost just eight games in her three matches this year.

Barty is into the second week at Melbourne Park for the fourth consecutive season.

At Margaret Court Arena, USA's Amanda Anisimova rallied to defeat the defending champion Naomi Osaka in a three-set thriller. The unseeded American edged Japan's thirteen-seed by 4-6, 6-3, 7-6(10-5) in a match that lasted for two hours and 15 minutes.

Anisimova will next clash with home favourite and number-one seed Barty in the last 16 encounters.

While at John Cain Arena, Alexander Zverev continued his scary pace as the German defeated a spirited qualifier Radu Albot 6-3, 6-4, 6-4 to reach the fourth round and set up a clash against Denis Shapovalov.

The pair's only previous meeting was a Zverev victory in a five-set first-round epic at the 2019 US Open, but the World No. 3 used his biggest weapons to good effect to ensure there was no repeat of that marathon. The German hit 16 aces and won 83 per cent (57/69) of points behind his first serve to brush past world number 124 in one hour and 57 minutes.

Earlier at Margaret Court Arena, Denis Shapovalov soared into the fourth round of AO for the first time, blunting big-serving American Reilly Opelka 7-6(4), 4-6, 6-3, 6-4.

The 14th seed played free-flowing, aggressive baseline tennis against 6'11" Opelka, showcasing impressive footwork to dictate on his heavy forehand as he backed up his fifth-set second-round victory over Soonwoo Kwon in style. (ANI)