Australian Open 2021: COVID-19 Case Could Have Impact on Preparations

It's the event for those players who were forced into hard lockdown — not allowed to leave their rooms, even for practice — after being deemed close contacts of passengers on their flights who test positive for COVID-19 after arriving in Australia. 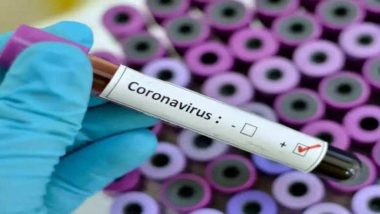 Melbourne, February 3: Some players preparing for the Australian Open will have to isolate until they return a negative test for COVID-19 after a worker at one of the tournament's quarantine hotels tested positive for the virus.

Daniel Andrews, the political leader of Victoria state, called a late-night news conference Wednesday to announce the case and urged anyone with symptoms in Melbourne to get tested. Andrews said the case could have an impact on the tuneup tournaments for the Australian Open this week, with players who stayed at the hotel considered casual contacts of the 26-year-old infected man and required to isolate until they've returned a negative test. Serena Williams Keeps Rolling in Tuneup for Australian Open 2021.

But he said he he didn't expect any disruptions to the Australian Open, which starts Monday. There are six tournaments being played at Melbourne Park this week in the leadup to the year's first major. Australian Open organizers didn't immediately have details of how many players would have to isolate.

Hours before the government's announcement, 23-time major champion Serena Williams beat Tsvetana Pironkova 6-1, 6-4 to advance to the quarterfinals of the Yarra River Classic.

She will next face Danielle Collins, who upset third-seeded Karolina Pliskova 7-6 (5), 7-6 (3), and could reach a semifinal match against top-ranked Ash Barty.

Williams was later asked when was the last time she played a warmup tournament so close to a major.

The US Open, last year, was her short answer. Then she elaborated. "But before that, before this whole pandemic, I could count the times on one finger I've done that," she said. "I'm just happy to be out here in any circumstances. It's so cool after what the world went through the last 12 months."

Williams had a tough win over Pironkova in last year's U.S. Open quarterfinals, and then withdrew from their scheduled second-round match at the French Open because of an Achilles injury.

Williams won her last major title at the 2017 Australian Open, when she was pregnant with her daughter, Olympia. She's still chasing Margaret Court's all-time record of 24 Grand Slam singles titles, and an eighth in Australia.

Barty, aiming to break a long drought for Australian women at the national championship, had a 6-0, 4-6, 6-3 win over No. 52-ranked Marie Bouzkova and will next play Shelby Rogers in the quarterfinals.

On the bottom half of the draw, defending Australian Open champion Sofia Kenin rallied from a set and a break down to fend off Jessica Pegula 5-7, 7-5, 6-2.

There were 89 matches scheduled at the Australian Open site on the middle day of a compressed week of six tournaments — including three WTA events and three for the men's tour.

The crush of matches was because of a 14-day quarantine period for all players who traveled to Australia for the tournament. That, in turn, pushed the Australian Open back three weeks from its usual start.

Daniil Medvedev secured Russia's win over Japan when he beat Kei Nishikori 6-2, 6-4. Russia is on top of Group D with wins over Argentina and Japan.

"Really happy for the team," Medvedev said. "Semifinals is a big step … hopefully we can go further than that."

Canada was coming off an opening loss to defending champion Serbia. Germany will play Serbia for first place in Group A on Thursday.

US Open champion Naomi Osaka advanced in the Gippsland Trophy, but needed three sets after a slow start. Osaka had a first-round bye and dropped only four games en route to her second-round win, so a 3-6, 6-3, 6-1 win over No. 371-ranked Katie Boulter was a change of pace. She didn't mind the extra work.

"Honestly I like playing long matches, just because I can gauge the condition of the court and I feel my fitness gets better," Osaka said. "I played a shorter match yesterday, so maybe subconsciously I made myself play a long match today."

Three-time major champion Angelique Kerber took a while to adjust in her first match since leaving quarantine, beating Katerina Siniakova 6-3, 4-6, 6-3 in the Grampians Trophy tournament.

It's the event for those players who were forced into hard lockdown — not allowed to leave their rooms, even for practice — after being deemed close contacts of passengers on their flights who test positive for COVID-19 after arriving in Australia.

Other major champions in the draw include Sloane Stephens and Svetlana Kuznetsova, who both lost in the first round. Two-time Australian Open champion Victoria Azarenka had a first-round bye.