Tech company Apple has rolled out a new iOS update for 5G-enabled iPhones starting from iPhone 12, and for those who install iOS 14.5. 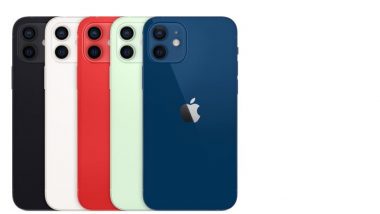 California, April 28: Tech company Apple has rolled out a new iOS update for 5G-enabled iPhones starting from iPhone 12, and for those who install iOS 14.5. According to Mashable, recent iPhone models (starting with the XS Max and XR) give people the ability to load two phone numbers at once, which can be useful for people with separate work and personal lines. Earlier, doing so on an iPhone 12 would lock the user into LTE service, even if one is all set up and ready to go with 5G. Now, iPhone users can get 5G connectivity on both lines.

Apple also has improved the iPhone 12's 'Smart Data Mode." A hidden option in the 'Cellular' section of the 'Settings' menu that makes the phone automatically switch between 5G and LTE depending on which one has better service at the time. With iOS 14.5, it should provide better battery life and performance than before. Apple iOS 14.5 Update To Be Rolled Out From Next Week.

Mashable reported that MacRumors pointed out T-Mobile's standalone 5G network is accessible to iPhone users who download iOS 14.5. In the same menu as 'Smart Data Mode', 'T-Mobile' customers can now switch to a new, faster "5G Standalone" mode. Prior to this, 'T-Mobile' users couldn't use 5G without also relying on LTE to some extent.