Australia will open its borders on Wednesday to travelers from South Korea and Japan, as well as for skilled workers and students from all over the world after the pause caused by the emergence of the new Omicron coronavirus variant, Australian Prime Minister Scott Morrison said on Monday. 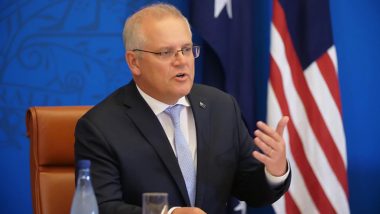 Canberra, December 13: Australia will open its borders on Wednesday to travelers from South Korea and Japan, as well as for skilled workers and students from all over the world after the pause caused by the emergence of the new Omicron coronavirus variant, Australian Prime Minister Scott Morrison said on Monday.

"On Wednesday of this week, we will move again forward. The borders will be reopened both to Korea and Japan and for skilled migration and for students, as we conclude the pause that we announced several weeks ago. This is made possible because Korea and Australia have both shared a COVID-19 experience," Morrison said during a meeting with South Korean President Moon Jae-in in Canberra. Also Read | US Shooting: One Dead, 14 Injured in Texas Vigil Shooting, Says Harris Country Sheriff Ed Gonzalez.

The prime minister also stressed that South Korea and Australia had exchanged their experience in the fight against the COVID-19 pandemic at various multilateral forums such as the G7 plus and the G20. Also Read | Indonesia: Mount Semeru Volcanic Eruption Raises Alert for Other Active Volcanos in the Country.

"Together we are two countries that have had one of the lowest death rates from COVID in the world. We have both got one of the strongest economies, each of us, moving through COVID and we share high vaccination rates. Australia and Korea have some of the highest vaccination rates, double dose of anywhere in the world. And so that is allowing our economies to open up," Morrison added.

He noted that the reopening became possible by the achievements made by South Korea in managing COVID-19. South Korean President Moon has expressed appreciation for Australia's decision to open up for fully vaccinated travelers from South Korea. He hopes the move will lead to more active exchanges and economic revitalization between the two countries.

In late November, Australia decided to delay the reopening of its borders to international skilled migrants and students, as well as humanitarian and provisional family visa holders, from December 1 till December 15 due to the spread if the Omicron coronavirus strain.

On Wednesday, a new version of the Omicron variant was recorded in Australia's Queensland. Omicron was first detected in South Africa in late November. The World Health Organization designated it a "variant of concern" due to exceptionally high number of mutations. Despite the new wave of travel bans on Africa, the new variant has since been detected in Europe, Asia, and the Americas.