The eruption of Mount Semeru in East Java province has raised concerns over the status of other active volcanos across Indonesia, home to more than 270 million people. 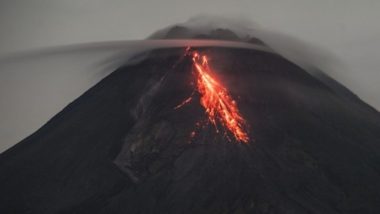 Jakarta, December 13: The eruption of Mount Semeru in East Java province has raised concerns over the status of other active volcanos across Indonesia, home to more than 270 million people. After Mt. Semeru's eruption on December 4, three volcanos have been on the level three alert status, the second highest, according to the Center for Volcanology and Geological Hazard Mitigation (PVMBG).

The three volcanos are Mt. Merapi, one of the world's most active volcanos located on the border between the provinces of Central Java and Yogyakarta; Mt. Sinabung in North Sumatra province; and Mt. Lewotolok in East Nusa Tenggara (NTT), reports Xinhua news agency. Kullu: Volcanic Lava Like Eruption Video Leaves Locals Worried and Confused.

Meanwhile, Mt. Semeru, the highest volcano on Java island, remains on the level two caution status. Mt. Merapi spewed hot clouds on Sunday within the radius of 2,000 metres, according to the Geological Disaster Technology Research and Development Center (BPPTKG).

"Hot ash clouds were recorded at 10.18 a.m. It also spewed lava three times," the BPPTKG's head Hanik Humaida said. The BPPTKG has warned local residents not to carry out any activities in the potential hazardous area, because if the volcano erupts, the spread of volcanic materials can reach the radius of 3 km.

No tourism activities are allowed within the radius of 5 km from the peak of the mount, and all mining operations should be stopped. The volcano agency has observed thick and high intensity of fog at Mt. Sinabung.

Local residents and tourists have been warned not to conduct any activities within a 3 km radius from the mountain's peak. Due to heightened activities of the volcano, the PVMBG has suggested that people wear masks outdoor to avoid volcanic ash.

Residents living near the rivers surrounding the mountain were told to remain cautious over potential of lava. Mt. Sinabung, with an altitude of 2,460 metres above the sea level, erupted in August 2010, the first time in hundreds of years.

The latest deadly eruption of Sinabung was in 2018, and no fatal explosion of the volcano was recorded since then. As of Sunday, the peak of Mt. Lewotolok has been covered by smog and its crater has become white with thick and high smokes.

The PVMBG has recorded volcanic earthquakes and light burst of volcanic materials. No activity within the radius of 3 km is allowed due to the potential of hot clouds. Citing the danger of the volcanic ash, the agency has warned that local residents wear masks and use other protection means to cover eyes and skins.

Newest data from the PVMBG showed that Indonesia currently has a total of 127 active volcanos, the highest number in the world, with more than 20 of which being considered to be the most active.

As of Sunday, the death toll from Semeru's eruption has reached 46, while nine people remain missing and hundreds of families have been forced to move to shelters, according to data from the National Disaster Mitigation Agency (BNPB). Besides Mt. Semeru, there are 10 other volcanos in the archipelago that have been on the status of level two.

(The above story first appeared on LatestLY on Dec 13, 2021 12:06 PM IST. For more news and updates on politics, world, sports, entertainment and lifestyle, log on to our website latestly.com).